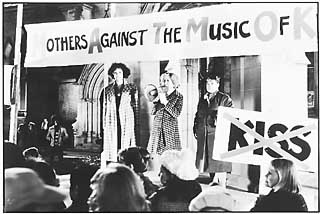 Reactions to Detroit Rock City may fluctuate according to your degree of nostalgia for the Seventies. This story about four high school dudes trying to get into a KISS concert by hook or by crook is a mildly diverting comedy but has little of real substance to recommend it. The outline -- and outcome -- of the story is set from the beginning, and brings nothing new to the table. Broad performances and wild zoom camerawork make this a cartoony slice of Seventies life, but it's too excessive to be mistaken for satire and too goony to be mistaken for a loving flashback. An opening montage of news footage sets the tone of the period nicely, as does the opening sequence of the boys rocking out at band practice. They're not good, but are enjoying every second. They drool over the fact that after school they are heading out to fulfill their greatest dream: attending a KISS concert. But then the most hellish of all hellish movie parents intervenes: Jam's Christian fascist mom burns the four KISS tickets in order to save her son from the devil. The requisite stoner, Trip, then saves the day by winning four free tickets on the radio, only later to learn that he screwed that up too. Each boy's mission takes him on a separate path to the Holy Grail and here the movie becomes really lethargic and uncreative. Only Hawk (Furlong), who for some reason decides that he has to strip in a bar in order to earn the money for scalped tickets, has much of a plotline. He dances, strips, and catches the eye of straight-to-video queen Shannon Tweed, who takes him out to a parked car and pays him for sex. For her part as the hypocritical psycho mom, Lin Shaye once again steps up to the plate as New Line Cinema's all-'round whipping girl. She's the bronzed hag in the studio's There's Something About Mary and Woody Harrelson's sex-starved landlady in Kingpin. Many are heralding this movie as a return of the teen rock comedy and citing such antecedents as Dazed and Confused, I Wanna Hold Your Hand, and Rock & Roll High School. Granted, the music in Detroit Rock City is pretty great (and not all KISS tunes) and constant, but the movie lacks one thing these other films had in spades: talent in front of and behind the camera. Oh yeah, did I mention that the members of KISS make cameos in the film and head KISSer Gene Simmons produced Detroit Rock City? 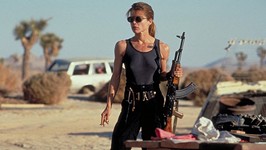 Terminator 2: Judgment Day
This one hails from back in the day when James Cameron and ILM still had something to prove.