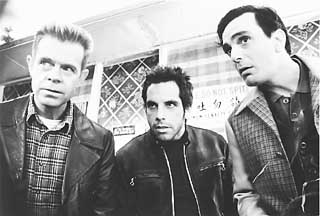 Usher, the man behind that relentlessly annoying “Yo Quiero Taco Bell” ad campaign, redeems himself a thousandfold in this snappy, slaphappy, utterly bizarre adaptation of Bob Burden's Dark Horse comic book of the same name. Any film that pairs comic master Stiller with his ex-paramour Garofalo is already golden in my book, regardless, but Usher's casting right on down the line is near-perfect, making this one of the most riotous ensemble comedies out there this summer. And never mind if you're perhaps not as schooled in the finer points of superhero comedics -- Mystery Men takes potshots at everything from highbrow consumerist gags to lowbrow fart jokes with gleeful abandon, savaging everything in its path. The story takes place in the mythical Champion City -- part Blade Runner, part Gotham City; it's a dank, gritty urban hellscape chock-full o' 24-hour diners and too many supervillains. Whoops, make that not enough supervillains. It seems that Champion City's number-one caped crusader -- the aptly monikered Captain Amazing (Kinnear) -- has vanquished every foe on the block, leaving himself essentially out of a job. As his publicist (Jay) puts it in the wake of a lost Pepsi endorsement, “Hey, I'm a publicist, not a magician.” The gag is, of course, that Jay is indeed one of the country's finest magicians. Too bad he can't salvage Amazing's career. To that end, Captain Amazing's alter-ego arranges the parole of this arch-enemy, Cassanova Frankenstein (Rush), from the local asylum to stir up some action. Things backfire, though, when Frankenstein promptly kidnaps the Caped Ego and threatens to lay waste to the entire city if his demands are not met. What's a decaying metropolis to do? In Usher's case, duty falls like an Acme-brand anvil on a group of none-too-super-heroes led by Mr. Furious (Stiller) -- a scrap yard employee by day, cynical hepcat by night, whose only real power is the ability to get really, really teed off. By his side are Azaria's effete, faux-British Blue Raja, a master of cutlery (except knives); Macy's Shoveller (“God gave me a gift -- I shovel well”); Mitchell's Invisible Boy, who's only invisible when nobody's looking at him; Garofalo's Bowler, who carries the skull of her father enclosed in a bowling ball as well as a hefty Elektra complex; and Reubens' Spleen, capable of deadly gaseous outbursts. Under the tutelage of Studi's Sphinx, a master of inane Mr. Miyagi-esque aphorisms, they team up to save the day regardless of whether anybody cares or not. Usher's film, from a script by Neil Cuthbert, skewers the ridiculous nature of the superhero genre with savage aplomb -- from set design to score to quirky acting chops (transvestite Brit comedian Izzard plays Frankenstein's henchman). Mystery Men is gleefully, goofily over-the-top. Usher even throws in a romance for poor Mr. Furious, which, frankly, is better than anything Superman did for a long time. As Sphinx would say, “The movie within is but a reflection of the comedy without -- know both and the laughter is you.” Uh, yeah, dude, whatever. 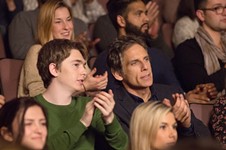