Jeanne Eagels is a biographical film based on the tragic life of silent film star Jeanne Eagels, a famed beauty who died in 1929 of a heroin overdose. The story contains some compellingly modern themes about career women and the choices they make in order to ensure their success, choices that place love and family secondary. Kim Novak, who was the number-one box-office draw of 1956, brings her uniquely endearing brand of voluptuous presence and stiff performance to the project. Jeanne Eagels was the first of two projects that Novak would complete with director George Sidney in 1957. The second was Pal Joey, in which she unforgettably croons "My Funny Valentine." Sidney had a propensity for backstage musicals and behind-the-show-biz stories (Show Boat, The Harvey Girls, Scaramouche, Annie Get Your Gun, The Eddie Duchin Story, Bye Bye Birdie, Viva Las Vegas), and Jeanne Eagels is no different. 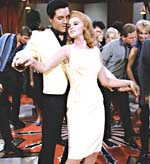 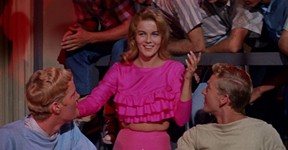