Given the engorged state of coming-of-age movies today, The Wood sounds like just another attempt to push the envelope of onscreen sexual propriety. The title, however, is a shorthand reference to the Los Angeles suburb of Inglewood, and the movie is a fond memory about growing up in the 'hood known as the Wood. African-American screenwriter-director Famuyiwa structures this autobiographical work as the backward glance of three friends reminiscing about adolescent folly on the day one of them is to be married. (The inebriated groom is AWOL; his two groomsmen are fetching him.) For Roland, Mike, and Slim, the occasion may be a last hurrah of sorts, a milestone in their bond. The now-and-then narrative of The Wood is often graceless, as it shifts back and forth in time without much fluidity. The absence of the fourth wall between the actors and the audience in the present-day sequences only underscores the movie's purpose: to romanticize yesterday. But it's an engaging recollection that's more sweet than bittersweet, tempered by an eagerness to please that pulls us into its remembrances of things past, that is, from the male perspective. (Make no mistake, however, about Famuyiwa's motives; this is no response to Waiting to Exhale.) There are comic absurdities that give the film a little edge -- a whacked-out convenience store holdup is Tarantino without the bloodshed. But overall, The Wood is a relatively unsophisticated movie that simply understands how lasting friendships are forged through common experience. And better yet, while its hormone-driven young men get erections at inopportune times and yearn to touch the booty, no one has to resort to boinking an apple pie. Imagine that. 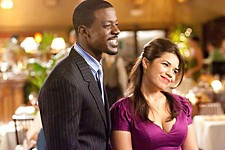