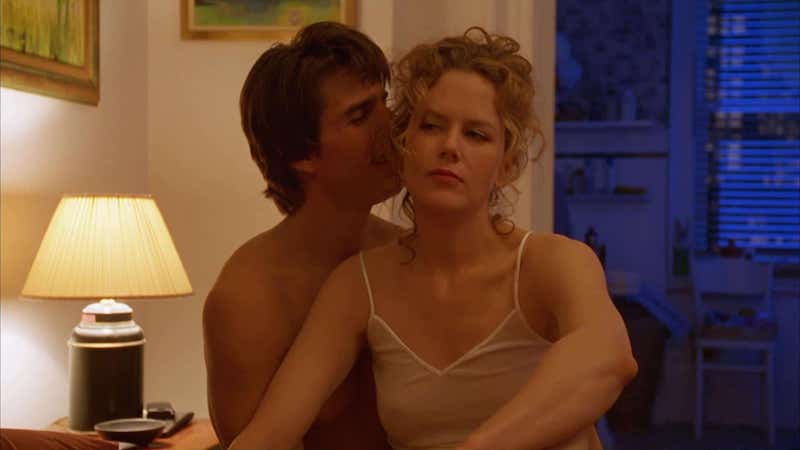 Who knows what darkness lurks in the hearts of lovers? Kubrick apparently does, and in his 13th, final, and most eagerly awaited feature film he takes us on a bizarre nighttime ride into the bleak, tortured hearts of Dr. William Harford (Cruise) and his wife Alice (Kidman). The casting of this real-life power couple as the film's heretofore loving marrieds is a coup in and of itself – it adds yet another layer to a film that has so many subtexts already that repeated viewings are in order for those wishing to unravel the director's knotty skein. What begins as an ordinary night out for the Harfords – a cocktail party at the manse of family friend Victor Zieglar (played by director Pollack) – ends up, upon the return home, with an incongruous confession (revealed under the influence of a particularly powerful dose of pot) from Alice regarding an unconsummated mental affair she undertook the summer before while the couple was vacationing in Cape Cod with their young daughter.

Completely taken aback by his wife's confession of not-quite-infidelity, Harford spends the next 24 hours traversing the shadowy streets of New York, where he meets up with a variety of strange characters, among them a patient's daughter, amorous in the face of her father's death; a hooker, Domino (Shaw); and most significantly, his old med school pal Nick Nightingale (Field), who's now playing jazz piano in a Village bar. It's here that Harford is told of a bizarre costume fête taking place later that evening on Long Island, where Nick has been hired to play blindfolded, and where, apparently, a sort of latter-day Hellfire Club is re-enacted. Intrigued, and still unable to remove the dolorous stain of his wife's indiscretions from his mind, he quickly rents a costume and enters the gathering, unaware that there is far more at risk here than simple unmasking by the power elite.

These scenes of debauchery and lust that make up the film's centerpiece are among some of the most powerful and disturbing ever put to film; there's a regality to the proceedings, accompanied by composer Jocelyn Pook's haunting piano score, that call to mind the crimson schemings of the auto-da-fé or, on a less likely note, Ken Russell's The Devils. It's grandly surreal stuff, counterweighted with Kubrick's unerring sense of chiaroscuro. Rarely, if ever, have I seen a film (and certainly not in this decade) that has been so visually compelling, from Kubrick's choice of granular stock to the brilliant, burnished ambers and frosty blues that make up the film's palette. If this film were a meal, I shudder to think of the damage it might do to one's vitals.

With a two-hour-and-40-minute running time, this is one of Kubrick's lengthiest pieces, though it drags hardly at all. Cruise, an actor I've never warmed to, performs well enough – that goofy, toothy smile of his threatens to rip through his cheeks perhaps too often, but then there's a bit of Ray Russell's Mr. Sardonicus in that as well, an aspect of the performance that Kubrick doubtless intended, like a puppy dog eager to please despite the rolled-up newspaper. Kidman is radiant and at times coolly threatening. She's the linchpin that holds together the story (from Arthur Schnitzler's 1926 erotodidactic novel Traumnovelle), though she's onscreen far less than her husband. As for the rest of the film, there's far too much going on in the background, behind animal masks, behind closed doors thrown wide, to enter into here. Let's just say that Kubrick has created a final chilling meditation on skewed relationships and interior beasts. It's a fitting capstone to an utterly unique and eccentric auteur.