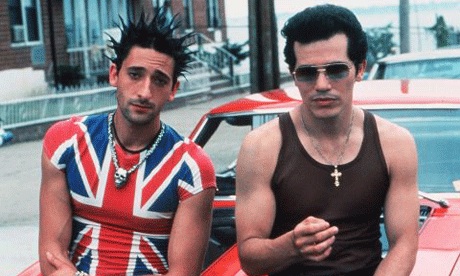 In the summer of '77, I was 11 years old and living in upper New York state, but I still vividly recall the newscasts announcing that serial killer David Berkowitz had finally been collared by New York's finest. Son of Sam's arrest ended a long string of 72-point headlines that emblazoned the front page of the newspapers I delivered after school, banal in their smudgy gray type but brutal in the paranoiac, siege-like messages they carried from The City. It was hot out, too, and if I'm not mistaken, that was also the summer that the 11-year-old's Bible -- Mad magazine -- carried their first barbed satire of Britain's newest stateside import, Punk Rock. If you're wondering where all the personal reminiscences are heading, they're all integral parts of Lee's new film, which, like that long ago summer, is a nerve-wracking, at times comical jumble that goes on and on and on. At almost two-and-a-half hours, Lee has erred on the side of excess, though unlike a number of his latter films (Girl 6, Clockers) it doesn't strain so much as crackle along like heat lightning presaging an August downpour. In Lee's character ensemble, the shamefully underrated Leguizamo is Vinny, a Bronx Italian hairdresser who, when he's not busy philandering on his adoring wife Dionna (a radiant, chipper Sorvino), hangs with the neighborhood mook squad and pals it up with his old friend Ritchie (Brody), a former mook turned punk, just back from a year stint hanging out at Bleeker and Bowery and currently making time with 'hood bad girl Ruby (Esposito). Bookended by Mr. Naked City himself, Jimmy Breslin, Summer of Sam is less about the pathetically deranged Berkowitz's killing spree than it is about things -- all things -- breaking past the flashpoint in New York City's hottest summer on record. Lee uses the pudgy, asocial killer as a recurrent motif that hovers over the film like a noxious black cloud, while below, where the little people live (of which Berkowitz was, ironically in the end, one of the littlest), things go from bad to worse, as vigilante gangs of toughs take to the streets, young women frantically bleach their hair to avoid fitting the victim's profile, and relationships sour like spilled milk on a steamy Bed-Stuy stoop. It's difficult not to hold Summer of Sam up to the near-legendary status of Lee's other ode to hot times in the City, Do the Right Thing. The similarities are there, yes, but Sam is altogether more ambitious both in its chaotic storyline, Lee's hyper-saturated, porno-flick choice of oh-so-grainy film stock, and Elmer Bernstein's brooding, neo-Seventies score. It's too ambitious, I think, and certainly too long by a reel or two, but Summer of Sam is nonetheless an intelligent, viscerally kinetic throw-down, a jolt of pure adrenalized Spike that holds more than a few touches of genius in its overripe storyline. It's Lee's best joint in a long time, and while it's far from perfect, it's also the most intelligently riveting film out there this summer, so far.