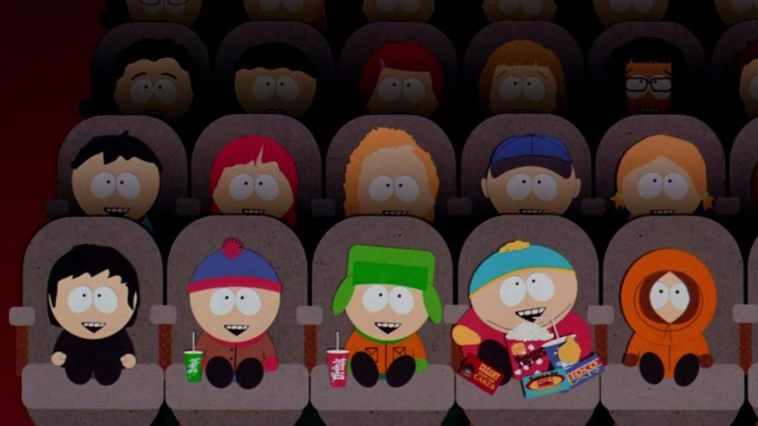 By now, you know that the naughty boys who created this land called South Park, Trey Parker and Matt Stone, don't just like crass humor -- they sport a throbbing boner for it. Therefore, you know that this bigger, longer, and uncut member of the South Park oeuvre is gross-out funny, over-the-top offensive, and just as amusing - or idiotic - as you find that Comedy Central sitcom. The fun begins when the four wee South Parkies -- Cartman, Kyle, Stan, and Kenny -- sneak into Asses of Fire, the R-rated latest from Canadians Terence and Philip, a comic duo whose repertoire consists essentially of fart jokes, racial slurs, and a beastly slew of cuss words. Sound familiar? Returning to their elementary school, the boys eagerly unleash a murky brown flood of expletives on their peers and unsuspecting elders. Militant parents, intent on stopping this corrosion of family values, decide there's only one thing to do: Blame Canada. Much gleeful song and dance ensues -- mostly hysterical numbers taking shots at everything from Andrew Lloyd Webber and Disney to MGM's old studio numbers -- as the U.S. military wages war on the Canucks, all in the name of preserving the delicate ears of these little chillen. Of course, all this brouhaha is a little word from our sponsors, eager to poke fun at a society that would rather see squirting jugulars on television than hear a particular four-letter word. But Parker and Stone make quite certain that if there are lessons to be learned in South Park, they're few and far between. Accordingly, South Park is a predictable affair; after all, that's what endears the show to so many viewers. Some bastard kills Kenny, Stan blows chunks on Wendy, Cartman gorges himself on Cheesy Poofs, but what the creators can do for the first time -- and do with giddy, outrageous abandon -- is cuss. And cuss. And cuss. Watching third-graders bask in yelling the uncensored “fuck” and “shit” (not to mention those doozies involving donkeys and apes) is funny, sure. But not nearly funny enough. A few groaner subplots just poop out, like the spats between a codependent Satan and his abusive lover, Saddam Hussein. Why fritter away time on this comic coiler? You can't shake the feeling that 60 minutes of comedy has been stretched and teased and goosed to make 80 minutes of movie. It'll provide teenage boys with plenty of asinine quotes for the school bus, but for anyone else, the film may feel like the cinematic equivalent of watching your 12-year-old brother dangle snot out of his nose (which, come to think of it, was pretty funny). But if you light your own farts, think “assmaster” is a clever comeback, or just can't get enough rimjob jokes -- South Park is the place for you. 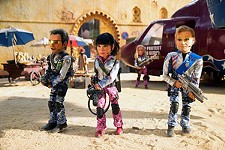 Cannibal! the Musical
Before there was South Park, Baseketball, or Orgazmo, there was this Rocky Mountain freakout from the fevered imaginations of Parker and Stone, a rousingly lowbrow ...