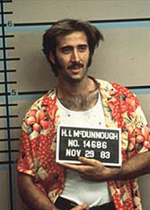 The Coen brothers sealed their place in film history as more than just a novelty act with this demented comedy about an infertile couple who steal a baby. The film's sense of family values will make your head hurt and the chase scenes will set your noggin spinning.