Increasingly, the line between computers and filmmaking is blurring. Recent storylines in multiplex releases -- from The Matrix to eXistenZ -- have brought the wired revolution to the fore while digital microbudgeted productions such as The Last Broadcast and the varied offerings of digifilm Web sites have upped the ante for the burgeoning tide of filmmakers-cum-techies. What was once a hands-on, nuts-and-bolts process involving emulsion and silver nitrate is in flux, steadily morphing into bytes and an entirely new spectrum of creativity. This revolution is at the heart of Conceiving Ada, an intellectually dense, occasionally bewildering meditation on Victorian proto-feminist and mother of what is now considered to be the very first computer language, Ada Byron King (Swinton, Orlando), Countess of Lovelace and daughter of Lord Byron. Director Leeson, a San Francisco-based photographer and computer-installation artist, has a million intriguing ideas going on here, so many crowded into the film's brief 85-minute running time that often it seems as if short shrift is being given to many of them. Structured, according to the director, like a the double helix of a DNA strand, the film begins in the present, with genius computer researcher Emmy (Faridany) discovering that she is pregnant by her live-in lover Nicholas (Wolfe). It's tough luck that the conception comes at a time when Emmy feels her mind to be more fertile than her womb. Immersed in an experiment that has something to do with traveling, via her PC, back in time to insinuate herself into the heart and mind of Byron King, Emmy at first decries the pregnancy, instead opting to continue her unhealthily wired lifestyle of cigarettes and cathode-ray immersion. When she finally connects with Ada (we know she's connecting because the monitor flashes "March 11, 1883" at us), she begins a two-way discussion with the dead woman's image of the history of Ada's remarkable life. Or is it an image? Leeson tackles just about any intellectual construct she can get her mitts on, some successfully, some less so, but the most interesting thing here is when the storyline changes to a first-hand biography: Ada King Byron, as seen through her own eyes. We witness Ada's relentless pursuit of knowledge (which occasionally overwhelms her: One shot has her cradling her harp, slapping her forehead and muttering "Stop thinking, stop thinking, stop thinking"). Her many romances, pregnancies, and revolutionary ideas reflect badly on even her Byronic heritage, or at least so thinks her mother (Black, also seen as Emmy's mother). The struggle of a Victorian female for the power, the liberation of knowledge (which, as we all know, wants to be free) is at the heart of Leeson's film and parallels Emmy's own current mathematical work. Cameos from cyber-celebrities R.U. Sirius (Wired), John Perry Barlow (Electronic Frontier Foundation), Timothy Leary, and Austin's own Bruce Sterling, make this heady, challenging film a must-see for those interested in skulking along the cutting edge, though more mainstream viewers are likely to be left feeling as if they may need to "force quit" and reboot their mental hard drives. ( ConceivingAda first screened in Austin at SXSW '98.) 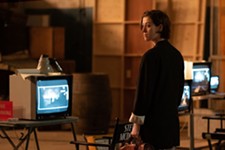