It's hard to imagine what Disney thinks they have here with this unusually fashioned biopic of long-distance-running champion Haile Gebrselassie. Not quite a full-fledged documentary, sports biography, or inspirational work, Endurance has elements of all these familiar types of filmmaking yet could be said to belong to no one genre in particular. Also difficult to figure is who the target audience for this movie might be. Running enthusiasts eager to learn more about this 1996 Olympics winner from Ethiopia will be treated to some beautifully filmed, almost ethnographic detail about Gebrselassie's impoverished childhood but will discover little of the inner psychology of what makes Haile run. Viewers looking for a story about the thrill of victory will be stymied by the film's opening presentation of Bud Greenspan's acclaimed Olympics footage (which was not aired at the time of the event) that reveals from the outset how much Gebrselassie has achieved. Adults may be put off by the seeming simplicity of the narrative, which is told with a bare minimum of dialogue and chapter-heading-like intertitles. Children, however, may be put off by the slow, graceful beauty of Endurance and its simple methodology. Yet these are the very qualities that may help boost the film's fortunes overseas among people of various languages and in countries hungry for Third World heroes. All this makes Endurance a hard film to pin down; however, its elusiveness just may be part of its appeal. After beginning the film at the Olympics, the story then flashes back to Gebrselassie's early years in Ethiopia. The grinding poverty and the 24-hour-a-day task of survival occupies the young boy and his family members. Many of Gebrselassie's relatives are played by actual family members: A nephew of Gebrselassie plays the runner as a child, Gebrselassie's sister plays his mother, and so on. Director Leslie Woodhead is an acclaimed British documentarian and his footage of the area (filmed on location) has an anthropological feel, though the landscape often resembles the tactile grace of a Terrence Malick panorama (Malick, indeed, serves as one of the film's executive producers). The intertitles inform us of such rudimentary details as, “Six miles to school,” “Three hours a day to fetch water,” “Every year a new brother or sister,” and then the film proceeds to act out the information with very few words. The animism of the land, the exoticism of the Coptic Church rituals, and the musical mixture of native sounds and the runners' heavy breathing all help create a swirl of textures. Still, at 83 minutes, Endurance seems long. And the film leaves so many questions not only unanswered but unasked. Why does Gebrselassie run? What was it like for him to disobey his father and leave home to pursue his dream? How deep is the chasm between anonymous Third World poverty and instant international celebrity? Endurance will answer none of these, so it does not bring home the gold but still slices past the finish line. (See related interview in this week's Screens section.) 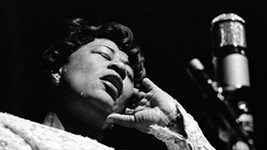 Ella Fitzgerald: Just One of Those Things
The life and legacy of the First Lady of Jazz