High school: Is there a more nightmarish circle of hell anywhere else? You wouldn't think it to see Payne's (Citizen Ruth) take on the exclusionary politics of the dreaded student council electoral process. A fine, near-seamless film that finally suffers slightly from an inability to wrap up its tale, it's the story of senior Tracy Flick (Witherspoon), a turbocharged, blond cookie of a go-getter hellbent on achieving success by hook or by crook. Toward that end, this insufferably perky dynamo of a Betty has positioned herself at the top of the class, heading countless after-school affairs, editing the yearbook, and spearheading any activity that will resonate on her all-important transcript. In that regard, she's Rushmore's anti-Max Fischer, who, despite his ponderous after-school curricula, remained a marginally lovable failure. Tracy, however, is about as lovable as a PMRC-era Tipper Gore, and she boils over with conniving schemes coolly calculated to thrust her into the elite lifestyle she's seeking to fashion post-high school. When she embarks on a campaign for student council president -- unopposed -- she runs afoul of Broderick's civics prof, the denuded and deluded Mr. McAllister, who, despite his obvious love of his job, manages to come off as a schemer in his own right. Urging the injury-sidelined and preternaturally popular and blissfully dim jock Paul Metzler (Klein) to run against Tracy in the interest of “the democratic process,” McAllister unleashes a Pandora's Box of high school horrors that eventually undermine his credibility, his job, and ultimately his life. Payne's ruminations on the abuse of power and political machinations aboard the good ship Scholastic Drudgery carry comic incisors quick to puncture the obvious. When Paul's lesbian sister Tammy joins the electoral fray, shattered that her kinda-sorta gal pal switched camps mid-relationship in favor of the oblivious Paul, the three-ring circus reaches a comic flashpoint that leaves charred ambition in its garrulous wake. Despite the high moral ground Payne trods, it's Witherspoon's film all the way. She pouts, she trembles, she explodes into wild, hilarious, painful tantrums when her best-laid plans scurry southward. She's the darkly efficient heart of high school, machine-like in her single-mindedness, disturbing like a razor-bladed daisy but always frothily ebullient. Broderick deserves mention, too, for managing to make this poor sap of a teacher such a remarkably deluded schmo. A subplot involving spousal indiscretions confirms our worst suspicions, though Payne, with much gleefully dark, comic narration, flashback, and freeze-framing keeps Election from tumbling into the pseudo-ironic abyss into which so many other high-school-experience films seem to topple. Home schooling never looked so good. 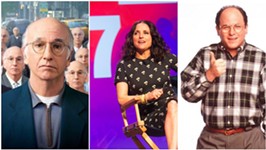 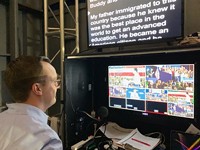