How Jan De Bont ended up as one of three executive producers on this goofily affecting coming-of-rage story is a story in itself (and one that I don't have room to go into here), though we should all be thankful Lillard (Scream, Wing Commander) stars -- and not Keanu. Lillard cuts a fine figure as 18-year-old punk rawker Stevo, a blue-haired, self-proclaimed anarchist trapped, for the moment, in the decidedly un-punk locale of Salt Lake City (hence SLC) circa 1985. While the rest of the U.S. was busily shaving their heads and mourning the passing of Minor Threat and the Misfits, Stevo and his best bud “Heroin” Bob (Goorjian) make do with what they have, which is, essentially, nothing. Bob, his nickname affixed as an ironic twist on the fact that he can stand neither needles nor drugs, is the angrier of the pair, a shoddily mohawked Crass-punk wannabe, who, along with Stevo, spends his time drinking, drinking, and hollering obscenities in between drinks. Stevo, on the other hand, finds his lifestyle cramped by his ex-hippie dad, now a high-powered lawyer and single cad-about-town. Vowing never to follow in such ungainly footsteps, Stevo dedicates his life to anarchism, which in this case involves hanging out in the duo's ratty warehouse and carousing with the local mods and skins. There's not much else going on in Merendino's film, though as a portrait of an unlikely mid-Eighties punk scene, I've lived through worse. What works here -- to a point -- is Merendino's snazzy, balls-to-the-wall direction, a stuttering mélange of wild angles, slo-mo, LSD-inspired dream sequences, spotty in-camera edits, and scene after scene of our boy Stevo kickin' down that inimitable fourth wall with enough smarmy, cynical attitude to make David Spade look like Martha Stewart. Frequently turning to the camera to expound and explain the whys and wherefores of the SLC punk scene, Stevo ingratiates himself with the audience by sheer virtue of his gangly chutzpah. Clearly, this is a guy who could sell a Nazi skin a lifetime membership in Sy Sperling's Hair Club for Men. Explaining the nature of punk rock fighting, Stevo admits he doesn't know why it happens, and instead offers up an animated version of the prototypical punk skirmish, complete with diagrams and flying body parts. Lillard is the focus here, but Goorjian, as Bob, is the breakout scenemaker, casting his hormonally challenged nail-biter as a fully rounded (albeit mildly defective) human, and making the one-two sucker punch at the film's end that much more powerful. Merendino's film is lacking the streamlined cohesion it needs to spike itself in your cortex as hoped, but it is about as accurate a punk film as I've seen in some time, especially when it comes to the horrors and boredoms of small-scene life. 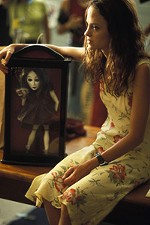 May
"I like weird," announces Adam (Sisto), the guy on whom the socially awkward and budding sociopath May (Bettis) has set her sights. This is a ... 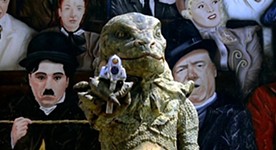