Steam is a little moist around the edges, often to the point of being soggy. This Italian-Spanish-Turkish production about an uptight Italian businessman, Francesco, who inherits a deteriorating hamam -- a Turkish steam bath -- in Istanbul is difficult to characterize. Is this a film about a Westerner experiencing the mysterious allure of an exotic culture, à la Paul Bowles? Is it a commentary on the elusiveness of happiness and contentment in a life dominated by cell phones and business deals? Is it a work about the importance of keeping tradition alive in these contemporary times? Is it a film about how destiny sometimes guides us to a preordained place? Or is it yet another movie about a man coming to terms with his sexuality? Steam is all of these things, in some respects, but only elliptically so. Because none of its themes are ever fully developed, you really don't know what to make of it. Ozpetek's direction is elegant -- he knows how to compose shots beautifully -- but it is dispassionate and static. While the movie's title suggests something sensuous and feverish, Steam is anything but steamy. Contrary to expectations, only a couple of the film's scenes take place in an operational bathhouse; much of the film occurs in the hamam that Francesco is renovating, after rather impetuously deciding not to sell the building to a local businesswoman. (His resolve to restore the bathhouse to its former glory proves to be fateful, which only further confuses the film's themes.) Steam achieves a degree of narrative tension only when Francesco's wife arrives from Rome for a visit and finds her husband a changed man, in more ways than one. (Gassman's performance as Francesco doesn't suggest much of a transformation; it is wooden and one-dimensional.) By this point, however, the film has lulled you into a vague complacency, so that the characters' revelations are neither surprising nor enlightening. Given this permeating haze, it's difficult to see anything clearly in this Steam. 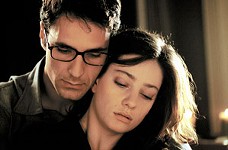