Finally, a film that answers the burning question: “Can a lovelorn Hong Kong explorer find happiness in a romantic triangle with a scantily clad jungle castaway and her gargantuan Cro-Magnon protector?” That is the burning question, right? Thank goodness Quentin Tarantino is around to cough up answers to life's myriad quandaries. This 1977 Shaw Brothers production from Hong Kong is a gleefully silly riff on everything from King Kong and Mighty Joe Young to Edgar Rice Burroughs' Tarzan, Lord of the Apes and, it goes without saying, Godzilla. Re-released by QT's Rolling Thunder distribution arm in an effort to revitalize the currently moribund midnight movie situation, this is Seventies hokum of the purest stripe: stunningly mediocre rear projection histrionics, flaming Tonka trucks, and power-mad giant-ape shenanigans. Never mind what Kraft Macaroni says, this is the cheesiest thing around. It's also peculiarly effective in its own hyper-goofy fashion, merging the standard morality lesson (i.e., giant apes belong in the jungle, not in major metropolitan areas) with chesty femmes and -- if my eyes don't deceive me -- what looks to be a micro-cameo by an uncredited (and very young) Chow Yun-Fat. The fun begins when a corrupt exhibitor hears tell of a giant ape-like creature stomping around the hinterlands of India. Quick to sniff out a possible source of income, he hires big-game hunter Johnnie Feng (Lee, of John Woo's The Killer) to mount a search for the fabled beast. Once in the wilds of India (which, frankly, looks more like Southern California), Feng discovers not only the fur-suited Man himself but also the creature's blonde bimbette gal Friday (think Mighty Joe Young's Charlize Theron in a creatively nonexistent bikini). It's love at first sight, of course, and while the young lovers alternately make hay and swing around docile leopards in slow motion (!), the expedition captures the Peking Man and hauls the disgruntled throwback to Hong Kong, where he's quickly put on display in a sublimely ridiculous stadium tractor pull. The crowds love him, but when the evil promoter (Feng) takes a misogynistic liking to Kraft's jungle princess, things go predictably awry, resulting in the destruction of downtown Tokyo and scads of priceless scale models. With a penultimate scene high atop an HK skyscraper, the finale recalls nothing so much as any version of King Kong you care to name. Director Ho has the Shaw Brothers' eye for ratty visuals and stunningly bad costuming (the film is particularly proud of the creature's animatronic facial expressions), but Mighty Peking Man triumphs by virtue of its sheer oddball charm. Touches like a weeping baby elephant and poorly dubbed dialogue (a fleeing man calls out, “Run! There's a gorilla, a giant gorilla!” to which the comic relief replies, “That's okay, my wife's a gorilla, too!”) make it all a delicious slice of psychotronic cheesecake fit for a king (kong). 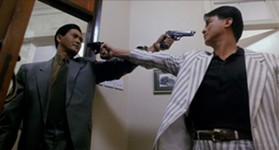 The Killer
This is the film that made John Woo and Chow Yun-Fat household names within action-crazed American households. Elements of conventional melodrama and criminal double-crosses blend in this story about a hitman conducting one last job to earn the money to restore the eyesight of a woman he had previously blinded.