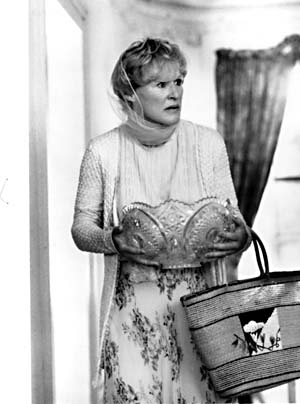 Robert Altman's jaundiced eye absolutely twinkles in Cookie's Fortune. This honeysuckle-flavored comedy set in Holly Springs, Mississippi is as sweet and refreshing as anything he's ever done. The focal point in Anne Rapp's engaging screenplay is the suicide of an aging matriarch and the confusion that ensues when her death is made to look like a murder. During its slightly off-kilter course, Cookie's Fortune wryly comments on the dynamics of life in a small town, where everything is everybody's business and a man's guilt is a matter of whether you've fished with him. Altman's direction is fittingly as light as the movie; he really seems to be enjoying himself here. His detractors have often accused him of condescendingly portraying individuals -- face it, Nashville didn't endear him to country-western music -- but he embraces the eccentricities of the less-than-cosmopolitan characters in Cookie's Fortune without judgment. People in Holly Springs just do things that come naturally to them, regardless of whether those things make much sense to anyone else. That's why the titular character Cookie kills herself without any warning, and why the immediate reaction of her uptight niece to this tragedy is to eat the suicide note. As in any Altman movie, the cast has a ball. (Lily Tomlin reportedly once told Carol Burnett to take the role of the bride's mother in Altman's 1978 film, A Wedding, even if it meant only carrying a spear.) The actors here are careful to avoid caricature; contrary to thespic tradition, even their Dixie accents are subtle. O'Donnell's clumsy rookie cop provides the film's funniest moments -- his swagger and false bravado are this side of Barney Fife, only more endearing. As his lust interest, Tyler plays a not-so-bad girl with a feisty and appealing verve. And while everyone else has his or her moments (Wilson has a great cameo as a no-nonsense blues singer who literally runs her own police interrogation), it's Close who carries the day as Camille Dixon, whose twisted sense of Southern propriety and family values sets the movie in motion. Close has played some demented dames in her day, but she's never depicted one with such comic insight. Whether she's knocking about in a yellow Pinto, biting crime tape in half with her teeth, or directing a church production of Salome as if she were Oscar Wilde herself, Close is a true joy. Without question, she's the heart and soul of Cookie's Fortune.