A Walk on the Moon

The summer of '69 … the summer the whole nation felt itself on the precipice of change. A decade divided by the politics of Vietnam and the dissent of the Sixties culminated during those summer months with the dreams of infinite possibilities that were sparked by the first moon walk and a general intoxication with the idea of a lifestyle revolution made palpable by the gathering of the flock at Woodstock. During the summer of 1969 the air was thick with the scent of change yet Pearl Kantrowitz (Lane), around whom A Walk on the Moon's story revolves, feels vaguely stifled. Married at a young age to the only man with whom she has ever slept with and having become a mother herself when she was yet a teenager, Pearl is troubled by the nagging sensation that life has passed her by. She knows, by most standards, that her life is a good one, but sometimes she just wishes she were “a whole other person.” Her amorphous feeling is exacerbated by the stale perfume of sedentary self-contentment that exudes from the other guests at Dr. Fogler's Bungalows in the Catskills, where Pearl is spending this summer -- like all other summers -- with her two children, mother-in-law (Feldshuh), and husband Marty (Schreiber), who commutes to the resort on the weekends from his job in the city as a TV repairman. Pearl is ripe for the picking by the time the sexy new Blouse Man (Mortensen) comes by on his sales route. Like a moth to a flame, Pearl is drawn to the languorous good looks of the itinerant salesman named Walker -- this hippie entrepreneur has an unconventional quality not shared by the Knish Man or the Ice Cream Man, or by the other commuting husbands who are but mere variations on Marty's good Jewish husband and provider. When Marty is unable to get away from work because everyone wants to have their television repaired in order to watch the moon landing, Pearl invites Walker to witness the birth of the new era with her. One thing leads to another, as they say, and by the time a few weeks later when Marty is again prevented from getting to the Catskills, this time by the parking lot of traffic heading to the nearby Woodstock event, Pearl and Walker are making love beneath waterfalls and in the mud of Yasgur's farm. Pearl's actions, of course, lead to cataclysmic family repercussions, and though the film's resolution of these various strands may be a bit tenuous and strain believability, the honesty of the investigation and the performances provide moving character studies and a sharp encapsulation of a moment in time and thought. The predicaments of all the other characters are treated as sensitively as those of Pearl: Marty's betrayed wage slave whose dreams of college and a professional career were thrown overboard for the sake of his family; and the Kantrowitz daughter Alison (Paquin), whose summer of getting her first period and first boyfriend and sneaking off to Woodstock is eclipsed by her mother's more girlish and more dramatic shenanigans. Actor-turned-director Tony Goldwyn does a capable job behind the camera, capturing the era's look and sounds while not adding many frills or stylistics of his own; Pamela Gray's script and the way these actors bring the characters to life are the film's real treasures. A Walk on the Moon defeats the laws of gravity in its search for a stairway to heaven. 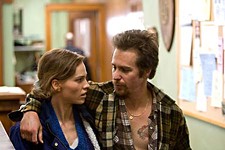 Conviction
Hilary Swank and Sam Rockwell star in this real-life legal drama in which a woman goes to law school in an attempt to exonerate her brother. 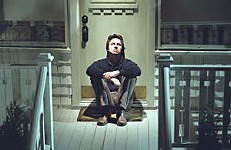