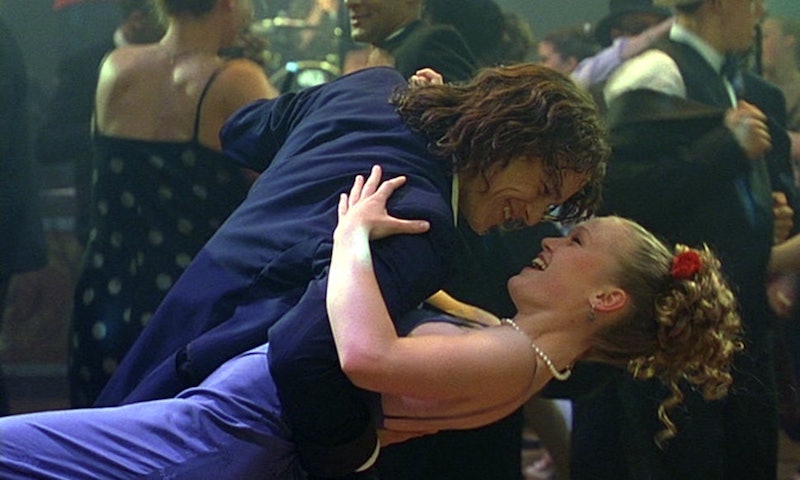 10 Things I Hate About You

There's a charming scene in this film that has the young protagonist, Patrick Verona (Ledger), trying desperately to prove his love to the lady fair, Katarina Stratford (Stiles), by serenading her with full accompaniment from their high school marching band. Security arrives and chases Verona back and forth, the length of the stadium, but his task is complete and the girl is won. Sort of. This updated version of Shakespeare's The Taming of the Shrew is only one of several such adaptations to come out this year, but it is one of the better ones so far, relying less on teen-comedy conventions and more on the Bard himself, even going so far as to drop in bits of the original text wherever possible. As for the story, screenwriter Karen McCullah Lutz wisely chooses to stick to the basics of Shakespeare's text and expand only where necessary. When Bianca Stratford (Oleynik) is forbidden from dating by her flustered father (Miller) until her older sister, who has absolutely no interest in teenage mating rituals, begins dating as well, she manages to convince her intended beau, the thuggish BMOC Joey Donner (Keegan), to pay to have her older sister wooed by the scruffy, Aussie-accented Verona. The machinations that come into play here, including the movements of the quiet, shy sophomore Cameron (Gordon-Levitt), who is hoping that he will be the one escorting Bianca to the prom, are complex and hilarious. When Kat begins to fall for Patrick's charm, he, unsurprisingly, begins to fall for her. And what's not to love? Stiles plays this “shrew” with dead-on accuracy, making her the live-action equivalent of MTV's Daria, a whip-smart, sometimes bitter girl with the soul of a poet who just wants this whole high school clique behind her. Prom and parties? They're not for her until she realizes, that yes, Virginia, there are other brilliant misfits out there as well as herself. She's a riot grrrl update of the traditional Shakespearean indie female, and both Stiles and Junger manage to breathe new life into an old character. It certainly doesn't hurt things, either, to make her a fan of the Boston-based grrrl rock band Letters to Cleo, who make an appearance as the school's prom band. Junger has a deft touch with light comedy such as this; he manages to keep the film's convoluted plot spinning without resorting to too much gimmickry or descending to the level of so many teen comedies. Kudos also to Larry Miller as Kat and Bianca's father, a single dad so wrapped up in protecting his girls that he has them wear a padded “pregnancy harness” to remind them of the dangers of dating. What would Shakespeare have made of all of this? I suspect he would have approved. 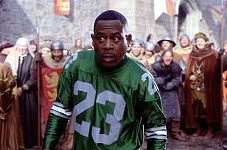 Black Knight
After the inexplicable popular success of Big Momma's House, no doubt Martin Lawrence and his handlers were searching for some sort of follow-up that would ...