The Deep End of the Ocean

The emotional currents run a shallow course in The Deep End of the Ocean. Based on Jacquelyn Mitchard's bestselling novel, it recounts a family's roller-coaster ride: the anguish and guilt felt after one of its members, a three-year-old boy, disappears in a crowded hotel lobby, and the joy and pain experienced when he reappears as mysteriously as he vanished, nine years later. This is a movie primed to strike a raw nerve with its themes of familial loss and displacement, much like Ordinary People. (It's little wonder that Oprah Winfrey chose Mitchard's novel as the initial selection for her book club.) But The Deep End of the Ocean never fully taps your empathy or your fears; it plays like a movie that's always about someone else. Except for a couple of scenes following young Ben's disappearance, there's an odd sense of detachment in the storytelling, even when the characters vent pent-up feelings. The movie's not so much superficial as it is oddly uninvolving. (Perhaps the film's atypical narrative structure -- it's really comprised of two connected stories that could exist independently of the other -- proved difficult for director Grosbard and screenwriter Stephen Schiff to master.) As Beth, Ben's mother, Pfeiffer gives a performance that runs a gamut of emotions, but she's rarely a strong presence. (Jessica Lange, on the other hand, might have imbued the character with a memorable maternal fury.) Her most powerful scene comes shortly after the kidnapping, when she watches herself pleading for Ben on television. Her reddened eyes set in a lifeless stare, Pfeiffer evokes something truly frightening in that moment: a woman undone. In following scenes, in which Beth's sorrow hardens into self-loathing, Pfeiffer is brittle enough, but she's too controlled to convey the heart that is breaking beneath the rigid exterior. Goldberg is wasted in the relatively minor role of the detective assigned to the case, who eventually becomes a family friend. She pops in and out of the movie with such inexplicable frequency that the real mystery is not so much Ben's whereabouts, but hers. (The offhanded revelation early in the film that Goldberg's character is gay, however, never resurfaces again.) Despite its messy issues, The Deep End of the Ocean would like to imply that wounds will heal and scars will fade. It's a comforting gesture, but one that only underscores the observation that the titular ocean here is knee-deep. 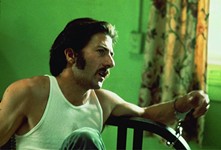