Hughes' ostensibly simple romantic comedy -- a man on his way to his wedding is sidetracked by a mischievous other woman -- is surprisingly more solid than you might expect, thanks to an over-the-top star turn by Bullock with assists from Zahn and Tierney. Certainly, there's no reason to break out the thesaurus to enumerate Bullock's many charms -- not here in Austin, anyway. But take note, people: The actress hasn't been as vivacious, as ingratiating, or as downright, drop-dead delicious as this in a good long while (I'm thinking Demolition Man, actually). Her wayward Sarah, an angel swaddled in devil's food, is the kind of spontaneously eccentric foil that Hollywood loves so much but so often blunders -- Bullock (no surprise here) carries off the role in giggly high style, replete with dueling slashes of thick black mascara and gobs of good-bad-girl attitude. Poor beau Affleck is left dog-paddling in her wake, and though he's as good here as he's ever been, he's still mainly a befuddled straight man to Bullock's titular force of nature. As Ben Holmes, Affleck begins the film on a flight to Savannah, Georgia, to marry his beloved at her parents' sprawling estate. When the plane suffers a deus ex machina accident -- courtesy of a wayward waterfowl -- Ben “rescues” Sarah, carrying her off the plane into the terminal, and unwittingly setting in motion an unlikely alliance. Stranded, the pair decide to make the best of it and embark on one of those fatefully error-strewn missions (think Planes, Trains, and AutomoBullocks) to get to Savannah and make it to the church on time! It gives away nothing to say that the pair arrive woefully late, nor, I think, to note that they grow closer, perhaps too close, on the way. While Ben and Sarah are making their slow Southern plod, Ben's fiancée Bridget (Tierney) puts up a solid front in the face of not only her betrothed's missing status, but also a massive Atlantic hurricane that threatens to wipe the wedding party clear off the map. As a metaphor for Bullock's character and the tidal twists of the fortunes of lovers, it's a doozy (albeit a tad obvious), though it adds little to the film's “will he or won't he” tension. Along with the film's outré performances, much of the gleefully fun tone here falls squarely to director Hughes, who uses occasional sprinkles of magical realism throughout to nail the story home. Several CGI shots of pattering rain and swirling cloud banks are dizzily intoxicating, and though, in the end, Forces of Nature is a creampuff of a film, it being a scrappy romantic comedy of the purest stripe, what's so wrong with that? Not a thing, Ms. Bullock, not a thing. 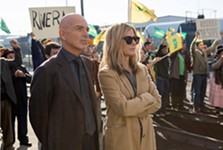