Wing Commander opens with a lovingly rendered CGI shot of the Japanese bombing the American fleet at Pearl Harbor back to the Stone Age, seen from above, with hundreds of Mitsubishi Zeroes pummeling the dry-docks. Except it's not 1941, it's 2564, and that isn't the United States' Pacific fleet, it's the Confederation's Vega System fleet. And those aren't the Japanese, they're the feral, deadly Kilrathi, alien invaders only filling in for our Pacific theatre foe as Roberts updates WWII for forward-thinking gamers everywhere. Ostensibly WWII in space, Roberts' tale of derring-do and sacrifice in the face of insurmountable odds plays like a collision of Run Silent, Run Deep and Star Wars, minus the latter's Joseph Campbell histrionics. It's rife with combat clichés -- hot shot pilots, flight deck romances, that grunt you just know is going to die before the film is half over -- but curiously, these work to Wing Commander's advantage. While much of the film is taken over by enormously entertaining dogfight sequences (courtesy of Roberts' Austin-based Digital Anvil), much of it also rests on the narrative drive, which seems clipped part and parcel from one of those old Why We Fight documentaries that Frank Capra doled out to keep our G.I.s in fighting mode. That's not so recidivist as it sounds. Prinze is eminently likable (though far too earnest) as Lt. j.g. Christopher Blair, who's pressed into service to stop the Kilrathi from a planned attack on the Sol system, home to Earth and all things cool and good. Blair is a half-breed, part human and part “Pilgrim,” a group of early space travelers who forsook their humanity in favor of mastering space and time. Universally loathed, the Pilgrims are a nearly dead breed, of which Blair is presumably the last. His genetic skills in maneuvering Confederation ships through dangerous situations make him the Confederation's last, best hope for survival, and so off he goes. Along for the ride are his buddy Todd “Maniac” Marshall (Lillard, one of the most consistently entertaining young actors working today), and newfound paramour (and wing commander) Jeanette “Angel” Marshall (Burrows). All three characters could easily be dismissed as walking combat veteran clichés if not for the fact that they're clearly having a helluva time defending the universe from what are, essentially, mutant kitties with bad karma. In fact, the Kilrathi are one of my chief sticking points with Wing Commander: Who are they? Where did they come from? Why are they so intent on taking earth? All of these tactical questions are given short shrift in the film, leaving the race perhaps more of a cipher than it ought to be. And, of course, the latex-suited, whisker-faced costumes don't do much to help. Still, Wing Commander triumphs on sheer old-fashioned melodrama despite these flaws. It's Hellcats of the Navy parsecs out in the cold void of space, and like the Confederation it chronicles, against all odds it succeeds. 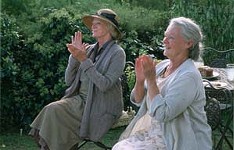 Ladies in Lavender
Even though grande dames Maggie Smith and Judi Dench share the screen in this drama, their immense talents are mostly wasted.