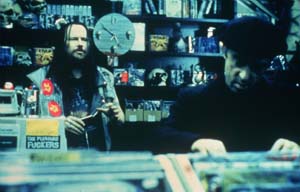 The Day of the Beast

Let it never be said that Alex de la Iglesia is a man lacking an artistic vision. His previous film, the outrageous Accion Mutante, was a bizarre melding of superheroes and freak show gore, and this subsequent comic horror film is nothing short of a hangman's slapstick masterpiece. Day of the Beast (1995) garnered rave reviews in its native Spain and took home no less than six Goya Awards (the equivalent of our own Academy Awards), even though this film is a far cry from your typical awards fodder. To paraphrase James Ellroy, it's a film for the whole family, if the name of your family is the Charles Manson family. It's Christmas Eve, and Pedro Almodovar regular Alex Angulo plays Father Angel, a Madrid priest who believes that he has found a secret code that reveals that the Antichrist will be born before dawn. The film's shocking and darkly comic opening scene sets the tone of the film, and though I'm not about to give that cinematic sucker punch away, it's a wonder de la Iglesia is able to keep upping the ante as the film progresses. Angel, scorned by his superiors and pretty much everyone else to whom he attempts to explain his revelation (which is understandable since he appears scrawny, wears a tattered beret, and has the earnest zealotry of a prime wingnut), embarks on a mission to seek out and eradicate “the Beast” while utterly forsaking his priestly duties. Casually knocking old men down manholes and toting a 12-gauge, he's like some karmic Father Badass, the Very Bad Priest with a monstrous chip on his quaking shoulder. Descending into Madrid's seamy underbelly, Angel aligns himself with two other fractured denizens of the night, a bloated death metalhead with the unlikely name of José Maria (Segura), and Professor Cavan (de Razza), the unctuous host of an occult-oriented reality-based television program called The Dark Side (think Jerry Springer with a more astrological bent). Through the course of this endlessly gory Christmas Evil, Angel and his allies struggle to find, defeat, and possibly even align themselves with the Devil's henchmen. While the film is rife with ultra-violence and crimson goo, make no mistake, this is also a howlingly outrageous comedy and frankly as original a horror film as I've seen in some time. It's certainly not for everyone -- the shot of a hellish ram standing erect on its hind legs and grinning out at you, a real ram, mind you, is almost too creepy -- but there is no mistaking de la Iglesia's wildly unique vision. This is a director with a fresh and startling (if somewhat disturbing) voice, and for fans of the genre a welcome addition to the international pantheon. 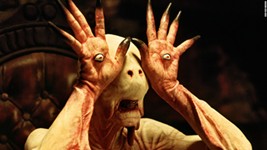 Pan's Labyrinth
Pan’s Labyrinth catapults Guillermo del Toro to the top ranks of international filmmakers: His dark and fertile imagination appears to have no limit.