Another Day in Paradise

This will forever be known in some circles as the film that sent Larry Clark back to his old heroin habit, and watching the four leads slog through a junkified parody of Midwestern family rituals, it's not hard to see why. Another Day in Paradise makes you want to take a hot shower afterward, and while it's similar in structure and setting to Drugstore Cowboy, Clark leeches the hazy outlaw life of any of that previous film's romantic notions of “the bad life.” Woods, amped up far enough into the stratosphere to pose a threat to commercial flight lanes, plays Mel, who, with his longtime junkie paramour Sid (Griffith, thankfully looking like she might not wake up cloaked in full Hollywood splendor for once) “adopts” Bobbie (Kartheiser) and Rosie (Wagner), a pair of wayward street urchins. Previously living a life filled with such epic crimes as battering the change out of candy machines, Bobbie, the very vision of emaciated junkie-chic, latches on to this surrogate father figure and embarks on a life of more substantial criminal acts, graduating under Mel's tutelage to knocking off pharmacies and the occasional murder. Rosie, meanwhile, takes lessons in street fashion and gunplay from faux-mom Sid, and together this hellish version of A Family Affair takes it all out on the road. Along the way, pretty much everyone lands on either the receiving end of a bullet or a syringe, necessitating some junky R&R at a rural rattletrap lay-low joint overseen by the truly bizarre and effortlessly disturbing Reverend (Otis), an outré bottom-feeding preacher man and part-time gun dealer who eyes Bobbie with a tad more than solicitous concern in his rheumy, oily eyes. Clark, whose first film was the controversial Kids, has based this film on a novel by ex-con Eddie Little. The film bears more than a passing resemblance to Clark's 1971 collection of photographs, Tulsa, which chronicled the sordid world of drugs, sex, and petty crime in backwater Oklahoma, a garishly lowlife scene which Clark himself remained a part of for many years. Clearly, this is a director who knows whereof he films, and, as in Kids, he strips the Calvin Klein gloss off the underground world of sick little boys and girls and sticks it right up in your face, an experience that's not always pleasant but surely makes for some gripping images. Of course, Woods “makes” the film, as he so often does. Manic, restless, paternal, and ultimately a seething sociopathic monster, this is, flat out, one of his best performances. Likewise Griffith, whose unnatural sex-kitten ambiance has so often grated before; here, Clark has knocked away her back-lit blinders and allowed the woman to finally claw her way out of the Hollywood mold she's been in for too long. Another Day in Paradise isn't perfect -- it tends to meander and ultimately the storyline is skimpier than Kate Moss' wardrobe -- but it is another nail in the coffin of Clark's critics who called his debut cheap exploitation fare (not that there would be anything wrong with that). Junkie flair, yes, but flair nonetheless. 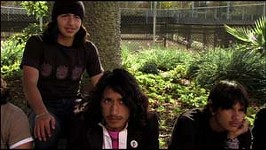 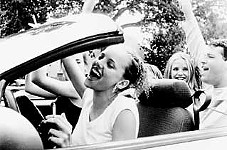