A friend of mine, years ago, frequently and vociferously declared during her pregnancy that “having a baby wasn't going to change anything.” It got so that every time we heard the refrain, my officemate and I would toss a dollar in a cigar box because we knew this was one bet we were going to win. A child was going to change everything, even change the ill-gotten idea that her life would more or less be as before. Nancy Savoca probably has a cigar box chock full of dollar bills -- not literally, of course (although I wish that her filmmaking would make that so). But Savoca brings a knowing intelligence to this story about a woman trying to balance her career and her family. It's the same sort of sharply observed women's reality that Savoca has brought to such films as True Love, Dogfight, Household Saints, and the script for If These Walls Could Talk. In each of these cases Savoca tackles subject matter that gets to the heart of women's relationships with social expectations and institutions: in consecutive order, marriage, beauty, religion, abortion, and now with The 24 Hour Woman, work. Savoca's focus here is not on tiresome drudge work, the kind of job that one might quit as soon as keep, but on the kind of work to which one is devoted, that is loved by the heart and nourishes the soul -- the kind of job that is practically 24/7 and impinges on the ability to maintain an equitable family life. Grace Santos (Perez) is one such woman caught in this bind. A producer of a New York City morning talk show called The 24 Hour Woman, she is newly married to the show's movie-star-handsome co-host Eddie Diaz (Serrano). Her pregnancy is announced on the air without her knowledge and from that moment on the show becomes “all babies all the time.” With a due date during a sweeps period and a consequent ratings increase that bumps the show from cable to network, Grace is in a pressure cooker from the first second the stick in her home pregnancy test turns color. She thinks she can do it all but, little by little, her confidence slips. Then, once the baby comes, her conflicts increase because she discovers that she wants to be with her daughter more than she wants to be at work. We also get to witness the influences around Grace: the hard-driving boss (LuPone), the unhelpful coworkers, the negative mother-in-law, the working-all-the-time dad, and of course, all those women's talk shows that have all the ready answers. Set up as contrasts to Grace and Eddie are the lives of Grace's assistant (Jean-Baptiste) and her househusband (Pierce), who have three children and are managing -- not without difficulty -- to work it out. Too much of The 24 Hour Woman is constructed in this paradigmatic manner; too often it smacks of having points to make rather than the urgency of a story to tell. Yet observations of such things as Grace hooked up to a breast pump or a woman's comment that she enjoyed work because at least “no one threw food around” lend the film a reality that's hard to mistake. The film moves quickly, and frequently farcically and quite satirically (especially when it mimics the conventions of the TV talk shows), and that more than makes up for any awkward moments of message delivery. Perez notably tones down her motor-mouth schtick and both she and Jean-Baptiste (both previous Oscar nominees) are engaging, genuine-seeming presences. The 24 Hour Woman is too obvious and too inconclusive to be considered Savoca's best work, but the movie goes places that few movies even dare to reach. 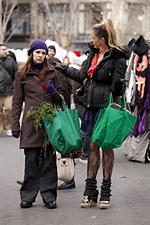 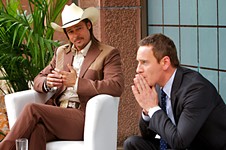