Message in a Bottle

A young woman running along a drizzly Atlantic shoreline. A bottle washed up at her feet. Inside the bottle a passionate letter from a man named “G” to an unnamed woman. And it's a real doozy: a love-hammered, claw-your-beating-heart-out, roar of wild romantic eloquence that sucks the breath right out of the lone jogger's body. Who'd have imagined such a guy exists? More to the point, is he dating anybody now? Fortunately, the woman -- a Chicago Tribune research assistant named Theresa (Wright Penn) -- has both the detective skills and initiative to find out. Using clues in the letter she tracks down G to a small North Carolina fishing village. To her delight, he turns out to be a cute/sensitive/handy-around-the-house shipbuilder, Garrett (Costner), whose letter was a tribute to his now-dead wife. Slam dunk! Well, not quite. Per ironclad romance-novel convention (the story is based on a bestseller by Nicholas Sparks), a convoluted steeplechase course of emotional obstacles must first be negotiated. Garrett, contrary to his Byronic epistolary style, is actually tight-lipped and obtuse in person. Worse, his lingering obsession with his wife keeps him from recognizing or seriously pursuing new love. Oh yeah, he's also scared of subways and can't see himself moving to the big city to accommodate Theresa's career. In short, this is your basic Soulmates Riven by Fate Plot #1744-B, with the addition of a ludicrous, out-of-left-field ending that serves more to extricate screenwriter Gerald Di Pego from the corner into which he's written himself than to honestly resolve the key story conflicts. Costner, whose Nineties career has settled into a hit-miss ratio of about 1:4, delivers one of his more unostentatiously moving performances here. Humility becomes Costner, and one imagines it comes pretty easily to him these days. Wright Penn's function as an emotionally uninvested contract laborer couldn't be more obvious. Dutiful pro that she is, she delivers every item on the romantic-heroine job ticket, but there's no hint of the galvanizing presence that scorched a hole through the screen in She's So Lovely. Hubby Sean Penn's blood pressure shouldn't so much as flutter during her kissing scenes. Paul Newman, as Garrett's lovably irascible ex-alkie father, emerges as the main justification for this film's existence. True, these cantankerous oldster roles are rather patronizing and redundant, and it's a bit depressing to see Newman reduced to playing them. But his seemingly effortless realness and iconic magnetism at least provide a handful of moments that transcend this movie's ruthlessly synthetic, market-servicing feel. Message in a Bottle inspires a thought, probably not original with me, that romance has a very odd parallel with hardcore porn. For diehard fans of both genres, shameless addiction obviates any concern about lack of imagination or subtlety. The rest of us, though, have to be seduced with a few gestural touches of intelligence, irony, self-aware humor … whatever. Otherwise, we feel cheap, exploited, used. Not exactly the stuff of true love, eh? 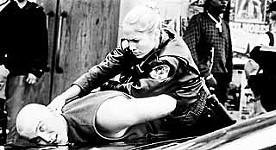 Angel Eyes
Its heart is never in the wrong place, but Angel Eyes is what Roger Ebert calls an “Identikit movie.” Director Mandoki and screenwriter Gerald DiPego ...