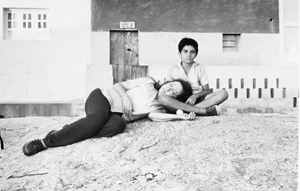 When first we meet Dora (Montenegro), the lead character of this compelling Brazilian film Central Station, her hard shell of cynicism does not seem inappropriate. We may not sympathize with Dora's coping strategies and human responses, but given the abrasiveness of her environment her detachment seems a reasonable defense. We are introduced to this retired single woman as she plies her trade: writing letters from a makeshift stall in the train station for the illiterate of Rio de Janeiro who want her to wave her pen like a magic wand and make their long-lost loved ones reappear and cause all their groundless dreams to come true. They dictate letters to saints, runaway spouses, and family members who long ago scattered to the country's massive interior. For additional money Dora promises to mail the letters but instead she takes them home and reads them for amusement with her friend Irene (Pêra, who played the prostitute in Pixote) before throwing them in an empty drawer or destroying them. One day after a woman and her son dictate a letter to the boy's missing father, the woman steps into the street and is killed by a bus. Seemingly, the young boy Josué (De Oliveira) has no one else in Rio to turn to for help, so he approaches Dora. She shoos him away but he sticks to her like any good movie orphan would. And we think at this point that we know where the movie is going -- it will be a heartwarming story about how the needy urchin wears down the older woman's defenses and teaches her the transcendent value of human contact. And to a certain degree it is, but things are not nearly that simple in Central Station. The movie is much more subtle about its journey, and the path it takes deviates from the well-traveled road. In fact, the central action of the movie occurs in the form of a road movie. The story is much less about its resolution than the experience along the way. At its best, Central Station is a movie of small textures and fleeting moments, the intangibles that pass between people. So much of the movie's success is due to the stirring performance of Fernanda Montenegro (who has just been nominated for a best actress Oscar along with the picture, which was nominated for a best foreign film Oscar). Hailed as Brazil's finest actress, most of Montenegro's work has been on the stage, so this screen performance in such a widely seen work is sure to bump her international stock in trade. It is understandable why she is so frequently compared to Guilietta Massina, the star and muse of so many unforgettable Fellini films: There is a physical resemblance that emphasizes each character's inner dilemmas and native physicality and forgoes the thin sheen of Max-Factored beauty. The nonprofessional actor, Vincius De Oliveira, was discovered working as a shoeshine boy by director Salles, who saw in the boy's pluck the qualities he wanted for his Josué. Salles, who also works as a documentary filmmaker, does a superlative job of bringing the realism of the streets and the countryside to this narrative fiction. Central Station is a film that shares the weight of reality with the fragility of the intangible. Despite its ultimate narrative predictability, the combination is a nice blend. Dark Water
Despite a dream cast, this Hollywood remake of a Japanese horror classic is all wet. The Motorcycle Diaries
Young Che Guevara takes a road trip up the length of South America and discovers his humanity in this portrait of the future revolutionary as a young man.