That masterful, enigmatically calibrated gauge which is the human sense of humor stands stripped within the presence of Craig “Spike” Decker and Mike Gribble, the guiding lights behind this long-running animated film festival. Watching the selections breeze by (few, if any, plod) on the screen, audience reactions are neatly divided into three possible exhortations: spiraling guffaws, squeamish shrieks, or incipient-projectile-vomiting moans, and a dulled, brief silence, preceded by the occasional gasp and almost always followed by a cathartic, explosive round of fidgety giggling. I'd wager these are similar in nuance to the reactions elicited by car-crash and carny-midway accidents: You know you really ought to turn away in disgust, but the reptilian fratboy inside says otherwise. As in the duo's previous collections, “crass” and “crap” are the bellwethers here, along with a healthy dose of stridently gamey sexuality and, lest we dispense with topicality altogether, at least one instance of Monica Lewinsky and a banana. Crass crap? In the world of animation, it's all relative. With that in mind, S&M's Showcase `99 is a substantial hoot. You may begin the journey with a chuckle, a snort, but all too soon you're liable to find yourself with a streamer of Diet Coke rocketing at heretofore unheard-of velocities from your left nostril while desperately struggling to keep the popcorn tub steady atop your suddenly roiling lap. Bathroom humor tends to do that to even the most otherwise reserved of us. Case in point is Bob McAfee's “Hey Fhuk Yew Tu: The Secrets of Flirting,” in which a lone stick figure fellow suffers the slings and arrows of outrageously P.C. femininity while trying to score a date. Breehn John Burns and Jason Johnson's “Beyond Grandpa” offers a -- ahem -- penetrating glimpse into the secret world of the old guy with the easy smile and the special room in his heart for barnyard fowl. For sheer cinema creepité there's Steve Margolis' “Animalistic Times,” a claymation exercise in nihilism and squishy bad taste that leaves the viewer craving a full-body Disney colonic to wash the nasties away. The majority of offerings here are less sick than they are twisted, if you get my meaning. Mike Johnson's deservedly lauded claymation take on the old C&W chestnut “Devil Went Down to Georgia” (with a musical assist from Les Claypool of Primus) is a keeper, as is the deliciously tact-free “Coco, the Junkie Pimp” (puppetry by Pete Metzger) and a series of one-off No-Neck Joe gags about a youngster suffering from Henry Rollins-ism of the torso. To top things off, S&M raid the demo reels of the newly rich and famous with not one but two Matt Parker and Trey Stone South Parkers, the new (perhaps only to me) “Frosty,” about an evil snowman, and “The Spirit of Christmas,” the Jesus vs. Santa epic that finally landed the pair on Comedy Central. Yes, it's crudity nonpareil and vulgarity taken to new heights. It's also the only place you're likely to see the mother of all dog-bombs emerge from the quaking hindquarters of a substantially smaller pooch. Sick, twisted, and bizarrely touching. I kid you not. 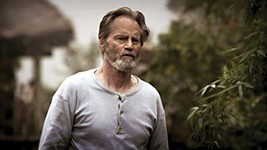 Blackthorn
Sam Shepard stars in this film which imagines what might have happened if Butch Cassidy had survived and lived on in Bolivia.