Pity the poor Mir space station. First it suffers the real-world traumas of lousy post-Perestroika management, technical foul-ups, and shoddy construction, then it suffers at the hands of both filmmakers Michael Bay (in Armageddon) and Virus' John Bruno. No wonder the Russian space program is in such tatters. Bruno, working from a script by ex-SEAL Chuck Pfarrer (who also created the Dark Horse comic on which the film is based), does his best to make this tale of otherworldly infestation on the high seas a rousing affair but fails miserably on all counts. I've seen sushi more frightening than anything in this film, and even the above-average cast can't seem to lock in to the required mode of action/terror hijinks the filmmakers had in mind. Sutherland and Curtis play a pair of high-seas salvage operators who, along with their motley crew, stumble across a modern-day Flying Dutchman after running afoul of a force-five hurricane. Sutherland, eager to recoup the losses sustained by his tug during the storm, decides to tow the stricken Russian science vessel back to safe harbor to sell as scrap. Maritime law appears to be on his side, but an alien life form (“Electricity that can think?!” mumbles one dumbstruck crew member) would rather turn Sutherland and his crew into meaty Erector Sets, complete with spinning blades and human viscera oozing appropriately. It is, of course, up to Baldwin and Curtis to save the world from the alien (if not the Mir -- that gets it in the first five minutes) and stand down their wild-eyed Captain. You know the rest. Sutherland, to his credit, does a fine impersonation of Captain Bligh on an anabolic steroid frenzy, but everyone else involved seems to have stumbled in from an episode of Earth 2. Rarely do we get the chance to see such poorly constructed models tossing in a tank of brine, and though director Bruno has had a hand in the special effects of both The Abyss and Titanic, the effects here are strictly Grade Z. With an eye-poppingly silly climax that has to be seen to be disbelieved and a welter of dialogue ripped straight from the pages of Amazingly Bad Tales, it's sci-fi schlock right down to its cheesy robotic monsters. It's also a lot like the 1980 Kirk Douglas/Farrah Fawcett clunker Saturn 3 on a boat, actually, with a good bit of last summer's Deep Rising thrown in for good measure. Unfortunately, Virus lacks that latter film's stunningly off-center wit and wildcatter direction -- as it is, it's dead in the water. 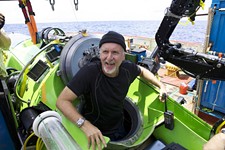