What a pleasant last few months it must have been for those male (and female) filmgoers sick to death of the blond, chiseled features of the Hollywood poster boys: first Brad Pitt performs a rag doll pas de deux with a pair of speeding automobiles in Meet Joe Black and now Val Kilmer stumbles around blindly (but not, I fear, unattractively) in At First Sight. It's standard operating procedure for the supremely handsome and ambulatory to tackle roles that perversely diminish their natural gifts -- it has always been -- but now the narcissistic wonderboys are flying blind, I think. Death just has to be better than Brad Pitt, and Kilmer's take on the sightless naïf strikes me as overly affected and stagy: You can see him straining toward the darkness, and the obviousness of it is grim and hamstrung. Kilmer plays Virgil Adamson, and like his namesake he's a poet. Not with words, but with his hands, which he uses to work free the tension-filled back muscles of the women who come to his upstate New York spa for rest and relaxation. When NYC architect Amy Benic (Sorvino) arrives for a week of stress relief, the pair immediately hit it off and before you can say Awakenings, she's convinced him to come with her to the city and undergo some experimental eye surgery that may or may not restore his vision. At first he's hesitant; he's safe in his tiny, insular township, watched over by his matronly sister Jennie (McGillis) and aware of where all the chairs are placed. But Virgil soon enough caves in, only to find, in the wake of the operation, that seeing isn't necessarily believing, or understanding, or better. Based on a section of Dr. Oliver Sacks' book, An Anthropologist on Mars (Sacks also wrote the book Awakenings), Kilmer is almost a mirror Method image of Robert De Niro's performance in that earlier film. Instead of Robin Williams, this time out we have Nathan Lane (Sacks himself appears in a cameo) as the nontraditional bringer of inner peace. And while At First Sight is a far more conventional love story than Awakenings, it's also far more mediocre, filled too often with Kilmer's grinning, impish face and enough Eddie Bauer-ware to flood Dawson's Creek. Director Irwin Winkler and his cast obviously hope to shed light on the boundaries of love, and instead come up with a walloping case of the preachies. At First Sight is so earnest I half expected to see Jim Varney skulking about in the background. Romantic comedy, tragic dramedy, it's all of the same cloth, and it proves conclusively that with this much teary treacle it's better to remain in the dark. 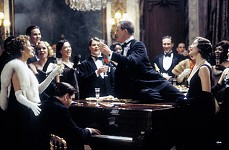 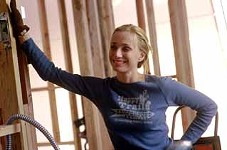