“Norman - Is That You?” The time has come to abandon the question of why Gus Van Sant did it. Because he could and because he wanted to should be reasons enough. It's easy to understand the curiosity, the challenge of the task, and the attraction of the ultimate methodology for getting inside the head of an artist so admired. It's even fitting, thematically, that Van Sant should want to shadow a director like Alfred Hitchcock, for whom doubling, doppelgangers, and mistaken identities were dominant narrative constructs. Van Sant used the carte blanche he earned from the success of the bland and prosaic Good Will Hunting to return to his artier and more experimental roots with this highly publicized and modestly budgeted “re-creation” (Van Sant's word) of Hitchcock's 1960 movie sensation Psycho. Unleashed to the public without advance screenings (since that's the way Hitchcock did it, a marketing conceit that might be more believable if things like admission prices and the film's budget were also rolled back to 1960 rates), the only question that should matter now is how well the re-creation succeeds. The answer is: alright, to a point. As an exercise it's always intriguing, but as a contemporary thriller the 1998 Psycho is hardly a white-knuckle ride. To some degree, that's because the plot is already well-known to us; but still, so much of the movie's thrill has to do with our appreciation of the devious finesse with which the filmmaker manipulates our emotions. But even here, a great deal of the genre's techniques and ploys seem routine and even clichéd in today's context. Van Sant's and Universal's hopes of luring a young, unacquainted-with-Hitchcock audience with this contemporary but faithful remake seems like a tough sell due to this generation's greater familiarity with the conventions of the slasher genre. Granted, the original Psycho is where a lot of these conventions caught fire, so this re-creation becomes almost a study of their efficacy and power. So what becomes very weird are the few moments in which Van Sant varies from his slavish re-creation. Why, for instance, in the most famous of all sequences -- the shower sequence -- does Van Sant cut away to a subjective shot of gathering clouds, à la My Own Private Idaho? Other updates make more sense (like the Walkman-wearing sister, Norman Bates masturbating while watching Marion through the office peephole, the sound of couples noisily making love in the next-door hotel room of lovers Marion and Sam, or the naked butt shot of Viggo Mortensen climbing out of bed), but don't really add anything new to our appreciation of the story. And why, when he was updating scenes, did Van Sant and writer Joseph Stefano (who also penned the original screenplay from Robert Bloch's novel) elect to leave in the obsolete touch in which the sheriff's wife rings up the old-fashioned rural telephone operator? But for William Macy's, the performances add little depth to these pre-established characters. Anne Heche seems lost, stuck in a fruitless search for the motivations driving this character from another era that no amount of tangerine-colored undergarments can solve. As Norman Bates, Vince Vaughn makes us better appreciate how much Anthony Perkins brought to the original project. It's clear now that he owned the role and that he shares equally with Hitchcock the credit for making Psycho the memorable creep show it is -- and was. Maybe it's just that Oedipally-fixated cross-dressers are way too commonplace in this day and age of tell-all television. Or maybe it's best to just let sleeping psychos lie. 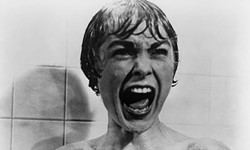 How Good Do You Look in the Shower?
Annie Ray sets up a Psycho-themed photo booth