This 1990 film from A Single Girl director Jacquot is more waif than naïf. With its abbreviated 78-minute running time and sunlit images of its youthful gamine coming of pouty-lipped age amidst an unconcerned Paris, it shares a close kinship with Claude Miller's La Petite Voleuse, and, like so much of the French New New Wave, contains echoes of everything from Bazin to Truffaut. It's not, however, that audacious a film; though it is beautifully shot and acted, it's a vague slip of a notion. There's not much there. Godrèche (The Man in the Iron Mask) plays 17-year-old Beth, a beautiful girl caught up in the most mundane of circumstances. Her boyfriend “Whatsisname” (Conrath) takes her for granted, her mother (Liotard) is a sick and aging prostitute who relies on the kindness of her sugardaddy (Desny) to make ends meet, and her friends are of no help whatsoever. Life for Beth is one long trial, as it is for most people her age (though in France you can imagine the torment is doubled, or so it would seem), and even a chance meeting and ensuing friendship with a switchblade-wielding writer on the Champs Élysées doesn't seem to help things all that much. If nothing else, Godrèche has mastered the fine art of ennui. When her mother cautiously suggests that Beth take over the servicing of “Sugardad,” she flounces, pouts, and then gets down to business. In the meantime, she attempts a fling with a wild-haired disco-nerd (on the flip advice of her uncaring boyfriend, who naturally becomes jealous), hangs with an Asian friend who makes silhouette artworks, and delivers biting essays on Rimbaud to her class at school. Jacquot's talent here is his ability to make the ordinary, minute-to-minute drudgery of existence seem somehow palatable, even noble. Beth, searching for a way out, decides to leave one day and does just that; it's not a surprise, but the fruition of that action speaks volumes. Preternaturally French, The Disenchanted (La Désenchantée) is less a narrative film than it is a character study of youth in general. Beth's place in the world may not be that of the average teen, but Jacquot makes it at least feel commonplace. His ability to capture the wry, knowing, self-effacing rhythms of teenage life is remarkable, and Godrèche, as expressive a young actress as you're likely to find these days, is stunning in a controlled, low-gear sort of way. Only Bozonnet, as the sharp-tongued writer, comes close on his own, though the whole ensemble interacts well enough. It's much ado about nothing, really, but what a lovely nothing it is. 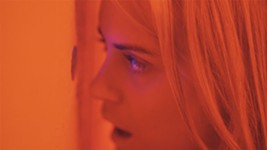