Loosely based on the exploits of real-life NYPD cop Bo Dietl (who has of late been making the talk-show rounds with Baldwin in tow), this bloody, brawling, testosterone-heavy cop drama is a pure Seventies throwback: I kept waiting for Serpico to show his face, but Baldwin -- as Dietl -- apparently walks a different beat. Though rife with gritty urban realism, One Tough Cop is also one bad movie, wholly dependent on the hoary boys-in-blue clichés that make those Sansabelt Seventies so much retro fun today. Fists fly, perps flee, and Dietl and his partner Duke (Penn, bloated and unctuous) wage an uneasy war for their embattled streets. Big deal. As Barreto's film opens, Dietl and Duke are called in to a hostage situation involving a little girl and her estranged father. After much negotiating on Dietl's part (he sets aside his piece, he strips off his shirt, he does pretty much everything the NYPD manual advises officers not to do), the girl is released, shots ring out, and noted character actor Luis Guzman is spurting crimson. Dietl's flouting of the established rules lands him in the hot seat with Internal Affairs, but it's his longtime camaraderie with boyhood pal -- and mafioso -- Richie (McGlone) that interests the F.B.I. task force headed by an icy Agent Devlin (Irving, woefully out of place). Having grown up together on those fabled, Scorsesean mean streets, Richie and Dietl share a common bond and act more like brothers than workaday adversaries. Dietl, despite what I.A. and the F.B.I. think they know, has spent his eight years on the force keeping his nose scrupulously tidy; he may be a maverick, but his cash flow's squeaky clean. When a grisly, Bad Lieutenant-like nun-raping occurs, Dietl and Duke ignore the orders of their superior officer and go after the crackheads involved, which, of course, only adds to the ongoing intra-departmental chaos. Subplots involving Dietl's romancing of Richie's moll (Gershon) and Duke's unassuaged gambling debts (and $10,000 in parking violations) add to the general air of NYC malaise, though One Tough Cop is almost comedic in its reverent attitude toward this hulking, sweatshirted toughster. “Youse guys” is actually uttered more than once in the film, and though there is no doubt that certain quarters of New Jersey and New York City still harbor such syntax-mangling über-hoods, its repetition elicits laughter more than sympathy for these duty-bound street creatures. Barreto does his best with what appears to have been a ridiculously macho script, but what he comes up with is 90 minutes of ham-handed neo-goofiness. Honor, loyalty, and all the other supposed virtues of the street still have their place, but One Tough Cop just makes them feel like so much Fifth Avenue window-dressing. 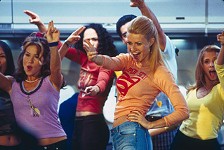 View From the Top
No doubt it gets stuffy winning Oscars and wooing onscreen suitors with a stiff British accent, which must explain why Gwyneth Paltrow signed on for ...