Artistic vanities, especially the cult of the romantic starving artiste, have always been sitting ducks for satiric terrorism. Among the writers who've taken their shots in this century, the most diabolically merciless -- the veritable Carlos the Jackals of their realm -- have been such renowned British curmudgeons as Kingsley Amis, Evelyn Waugh, and George Orwell. Orwell's early novel, Keep the Aspidistra Flying, is the basis for this acerbic little social comedy which, for all its broadness and uncharitability, goes down as clean and bracing as a neat glass of gin. Unsung character-acting genius Richard E. Grant, savored by a small but evangelically devoted cadre of fans for savory roles in Withnail and I, Franz Kafka's It's a Wonderful Life, and other semi-obscure movies, is the hero, a frustrated adman named Gordon Comstock who dreams of being a poet. One day Gordon decides to bloody well do it. He'll chuck his job, hole up in a garret somewhere, and pursue his true destiny as an ecstatic plumber of deep truths ignored by the smug bourgeois masses. Needless to say, Comstock is quickly revealed as a pompous, self-deluding twit. His pathological hatred of all things middle class is so extreme it causes him to fixate on inanimate objects like potted plants as symbols of conformity and philistinism. Surprisingly -- perhaps because he's so bizarrely sincere in his beliefs -- a handful of enablers actually stick by Gordon despite his fatuous posturing, drunken benders, and aversion to bathing. In particular, his practical-minded fiancée (Bonham Carter) seems willing to suffer the insufferable. She doesn't really understand what Gordon is after, but she recognizes an admirable bravery and focus in his quest. This is a movie that rewards patience. For roughly the first two-thirds, it seems that all Bierman (who sticks rigorously to Orwell's original tone and intent) accomplishes is setting up and mowing down clownish effigies: artistic poseurs; blueblood socialists; vulgarian ad execs. But then Orwell's true intent begins to reveal itself. With Grant and Bonham Carter delivering some of the more affecting, detail-perfect, and subtly humorous acting of their careers, a far more substantial theme develops about how concepts like “higher callings” should really be interpreted in human life. Never burdened with the bellicose Tory agenda of some of his curmudgeonly peers, Orwell's satire always was blessed with a bit more human empathy than theirs. That difference -- along with another priceless comic performance by oughta-be star Grant -- makes A Merry War worth two hours of your time despite its talkiness, cinematic monotony, and less than graceful narrative. It's a pretty dry brew all right, and you may wince at the first couple of sips. But once it gets in your blood I'm guessing you'll want to polish it off, right down to the last drop. 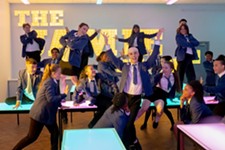 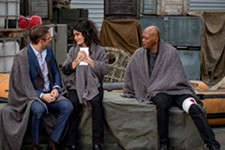