Despite the constant images of crackling fireplaces and guttering candelabra in this directorial debut by the screenwriter of Shadowlands, Firelight remains couched in darkness, not only of the literal sort, but also of the emotional. It's a grim, sweeping period romance, and though director of photography Nic Morris keeps things resolutely gorgeous (in a lachrymose sort of way), Nicholson's script is the sort of sub-Dickensian hokum that produces as many unintentional guffaws as it does watery eyes. As the film opens, it's 1838, and young Elisabeth (Marceau) enters into a secret agreement to bear an heir for wealthy British nobleman Sir Charles (Dillane), whose wife lies comatose in the wake of a tragic riding accident. Unaware of Sir Charles' identity, the penniless waif produces the child and is sent away, tuppence in hand. Seven years later, unable to bear the thought of the child she has given up, Elisabeth, looking none the worse for wear, finally manages to track down Sir Charles at his sheep-herding estate in East England. She re-enters Charles' life as the governess of his daughter Louisa (Belcourt), and though he is initially taken aback (his wife is still vegetating after all these years, and he has yet to take another lover), Elisabeth's calming influence on the incorrigible offspring gives him pause. At any rate, worse things are waiting, as they always seem to be in these sorts of retro-gothic affairs, and the care and feeding of one obstreperous brat eventually takes a back seat to more pressing affairs, like the various plot holes that yawn open from time to time and threaten to engulf and devour the whole sordid mess. Such points of interest as how Elisabeth managed to track down Louisa and Charles in the first place are entirely missing -- in one scene she's pining for her lost little girl and then literally in the next she's arriving at Charles' estate, valise in hand, like some pre-Victorian Mary Poppins. Other discrepancies abound, but to her credit Marceau's portrayal is so ravishingly tormented you may not notice the stumbles between the sobs. Likewise Dillane, who played a similarly tortured role in the recent Welcome to Sarajevo. The pair of them dredge up enough solid weepiness to make the Wuthering Heights lot look positively giddy, and taken with the aforementioned cinematography, the whole film comes off as one long Dead Can Dance video, minus the Middle Eastern trappings. In the end (and what a cheat of an ending it is!), it's all too far beyond the pinnacle of wretchedness to be taken seriously by anyone outside of Gothic Romance Novels 101. 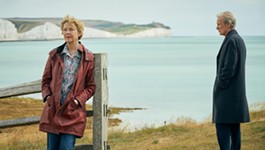