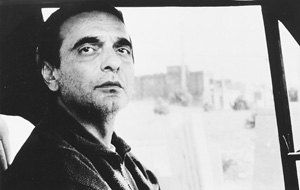 The prevailing critical sensibility is that the latest film, Taste of Cherry, by the esteemed Iranian filmmaker Abbas Kiarostami, is a “masterpiece.” The film was the co-winner of the Palme d'Or top prize at the 1997 Cannes Film Festival and has been lauded in countless reviews and has received placement on scores of influential critics' “best of the year” lists. That said, I have to report that I, personally, just don't get it. I intellectually understand what occurs in the movie; I just can't make the leap into calling it a humanistic treasure about life's big questions. Slow and monotonous, the film moves at a deliberate pace and culminates in a meta-fictional moment that is either infuriatingly trite or enigmatic. Austerely shot (rarely do each sequence's two characters appear in the same shot, reportedly because Kiarostami filmed each side of these conversations himself) and set in austere, bleak surroundings, Taste of Cherry's stark environment is appropriate to its existential pursuit of life-and-death questions. The film's central character, Mr. Badii (Ershadi), is a man who wants to die. He cruises the parched, desolate landscape in his Range Rover looking for an able-bodied man to shovel dirt on his grave after he's spent a night in the shallow hole with a bottle of pills. Most of the men he approaches with vague offers of an easy job opportunity are understandably wary of his motives. A young soldier from Kurdistan finally climbs in, but when Badii ultimately unfolds his suicide plan the serviceman literally runs for the hills. Next comes an Afghan seminarian who responds with a sermon about God's will. Finally, Badii picks up a Turkish taxidermist who agrees to the deed because he needs the money for his ill child. But first, he tells Badii a story about his own attempted suicide and instructs him to take a longer, more scenic route while sharing his insight about the redeeming power of nature and physical sensation. Exactly what we are to make of the men's successive increase in age or their different warring nationalities is obscure. Perhaps the same could be said for the unstated motives of Badii, who never explains or justifies what had led to his momentous decision (although 90 minutes in that bleak landscape might be enough to drive anyone to the final exit -- it's not insignificant that Badii's gravesite is next to the only tree on the horizon). No doubt this suicide contemplation is provocative stuff within the context of Iran's strict Islamic culture. Moreover, is Badii meant to be seen as a lucid existentialist or a self-absorbed obsessive? Why does he need to involve a second person in his solitary act of suicide, particularly to cover up his physical remains once they are no longer of earthly value? Multiple interpretations are possible and I guess that's part of what Taste of Cherry's supporters find so fascinating. The film's ambiguous ending has enough possible interpretations to fuel at least a dozen post-screening arguments. Others may just want to flee the scene and allow our enigmatic hero to go gentle into that good night. Life, as we all know, is not a bowl of cherries; it's a box of chocolates. 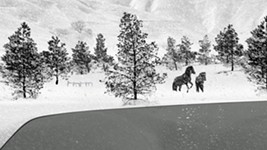 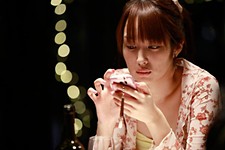 Like Someone in Love
The latest film from Iranian filmmaking legend Abbas Kiarostami is set in Japan and looks at some characters playing out approximations of love.