It was probably inevitable that mainstream cinema's master titillator Adrian Lyne would eventually get around to Lolita, Vladimir Nabokov's corrosive comedy about a middle-aged man's obsessive passion for an adolescent nymphet. However, Lyne (whose sexually exploitative works include such popular box-office fare as Flashdance, 9 1/2 Weeks, Fatal Attraction, and Indecent Proposal) has turned in a Lolita that is remarkably tame and tasteful. This is a Lolita for the English Lit crowd rather than the raincoat crowd. All of which only perpetuates the question of what all the fuss was about regarding this movie. Languishing for a year without any distribution offers, this expensive French-financed production was finally first shown a couple of months ago in the States on the Showtime television network. In an increasingly common strategy, this TV premiere is now being followed with a national theatrical release by Samuel Goldwyn Films. One doubts it was the movie's subject matter of pedophilia alone that scared distributors off. Call me jaded, but I think that if any of them smelled the possibility of return profits on this costly production, there would have been a line of distributors stretching across the Atlantic. Remarkably faithful to Nabokov's novel, Lyne's film (which was scripted by critic Stephen Schiff, a first-time screenwriter) stresses the all-consuming, self-destructive nature of the love Humbert Humbert (Irons) feels for the young Lolita (Swain, best known for her role as John Travolta's daughter in Face/Off), and even allows the audience to develop an uncomfortably sympathetic appreciation of his wretched predicament. The film starts wonderfully; the viewer is swept along by its sardonic, seductive tone. Yet the film bogs down after the first third as Humbert and Lolita travel the country locked in an ever more passive-aggressive emotional embrace. Lyne's direction at this point veers more toward his typical visual flamboyance with pumped-up angles and contrasts and editing. Irons, however, is a constant treat to watch as he here delineates yet another onscreen bad boy (he won on Oscar for his portrayal of Claus von Bülow in Reversal of Fortune). Swain is good but presents no equal match for Irons' well-seasoned technique. Griffith is out of her league altogether as Lolita's love-hungry mom, and Langella bears the brunt of the film's misplaced Grand Guignol comedy as the story's pedophiliac Clare Quilty. Ennio Morricone's musical score lifts phrases outright from some of his previous work. And surely the scene of Lolita eating ice cream on the kitchen floor in front of the open refrigerator is an appropriation by Lyne of his own 9 1/2 Weeks. And that more than anything else may mark the problem with this Lolita: it adds little to the canon but recycles much. 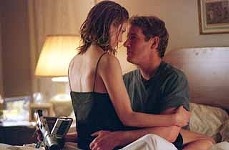 Unfaithful
Throughout his career, film director Adrian Lyne has gravitated toward the subject of sex and its power to both liberate and compromise the soul. Sex ... 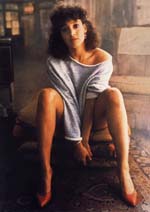