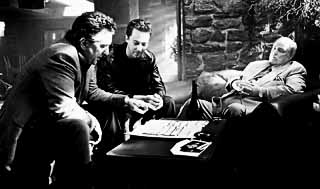 Radley Metzger, film's softcore artiste of the late Sixties and early Seventies (The Lickerish Quartet, Therese and Isabel), may be the filmmaker whose career seemed most unlikely for resuscitation. But Score, his bisexual romp from 1972, may prove these presumptions faulty. Drenched in retro-vogue, this Seventies time capsule captures everything from the period's very Brady decor to the hedonistic drugs 'n' sex to the ever-ready poppers on the night table. Metzger's films were made and released in that brief indie window between the chaotic late-Sixties break-up of the studio system and the wide release in the early Seventies of explicitly hardcore sex films. Metzger's stuff always fell into the arty camp, with mirrored effects and an uncommon attention to storylines. His compositions and narrative tactics owed more than a little tribute to the best of the new European cinema. Metzger started off as a straight filmmaker who learned his craft in the military and while editing trailers for Janus Films, a big distributor of foreign films at the time. But the commercial failure of his more personal projects opened his eyes to the potential of the exploitation and softcore market, and he went on to distribute two classics, I Spit on Your Grave and I, A Woman before directing his own softcore titles. Score is one of the last of them. The story is like a comic Who's Afraid of Virginia Woolf?. A libertine married couple Jack (Grant) and Elvira (Wilbur) lures other swingers to their luxurious home located “in the village of leisure, in the land of play, deep within the erogenous zone.” Jack and Elvira live for their sex games and one game in particular involves keeping “score” of which of them can consummate more same-sex seductions than the other. Their targets here are the clueless young marrieds, Betsy (Lowry) and Eddie (Culver). The game involves a trunk full of costumes (a sailor suit, cowboy duds, a sex-slave outfit, and a nun's habit), weed and the aforementioned poppers, and Polaroids. The dialogue is gently amusing and holds up surprisingly well, as does this storyline of same-sex seductions that climax in a cross-cutting frenzy of parallel bedroom scenes. By today's standards, what we actually see is relatively modest, though there's no mistaking what is getting sucked, penetrated, stroked, or gratified at any particular moment. The acting has more than a few rough edges, but it's not really the kind of distraction that gets in the way. At the time of its release, Score found it couldn't compete with “erections and cum shots” and quickly became a victim of its times. In retrospect, it's amazing to see how ahead of the times it was.