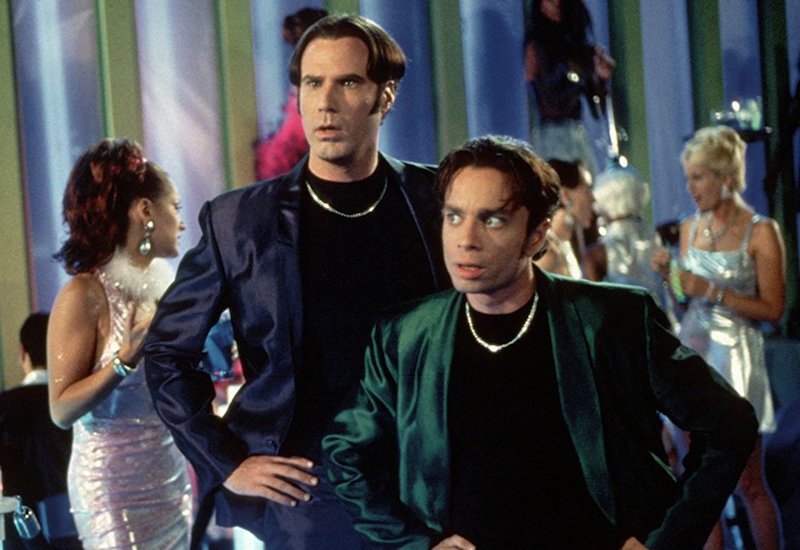 A Night at the Roxbury

Like all movie fans, I'm awed by Hollywood's relentless Napoleonic obsession with making movies of all known Saturday Night Live skits. And unlike many, I seldom even wonder how this bizarre passion began or why it persists in the face of such meager demand. Far be it from me to oppose manifest destiny. Still, movies as flagrantly vacant and pointless as A Night at the Roxbury do raise the question of how long the gods will keep letting us whiz away our precious moments of mortal existence before they simply get fed up and incinerate us all with plasma beams. Surely you're familiar with the premise. The Butabi Brothers (Ferrell and Kattan), SNL's mongoose-necked, rayon-suited disco commandos, are now the subject of a full-length feature that answers all our urgent questions about their backgrounds and aspirations. Both, it turns out, center upon their tireless efforts to breach the citadel of LA's glitzy Roxbury club and eventually become clubowners themselves. As with all of these SNL spinoffs (It's Pat, Coneheads, Wayne's World ,Stuart Saves His Family), the project's success hinges upon the writers' ability to dream up enough viable backstory to turn single-gag skits into watchable 90-minute films. Here, Ferrell, Steve Koren, and Amy Heckerling fall back on precedent (Wayne's World, Steve Martin and Dan Aykroyd's Wild and Crazy Guys) and imagine the lads as developmentally stunted child-men with delusions of grandeur. With a persistence available only to the totally clueless, the Butabis chase their dream of Rubell-like disco godhood against all odds, aided by the likes of 21 Jump Street heartthrob Richard Grieco and the unbilled Chazz Palminteri. But for all the grim effort invested in covering the screenwriterly bases of three-act structure, motivation, crisis, redemption, etc., there's no getting around a single brutal fact: Nobody really gives a flip. Not the actors, whose mailed-in performances convey the unspoken message, “Hey! I'm just puttin' food on the table here; if you don't like it take it up with my agent.” Not the filmmakers, who've scrimped at every turn from the mediocre cast to the hack writing team to the leadenly unimaginative directing. And, in all likelihood, not the viewers, whose chief reward for showing up will be the dismal sport of spotting has-beens like Dwayne Hickman (Dobie Gillis) and Loni Anderson in cameo roles. “What is love?” Haddaway asks in the omnipresent soundtrack song. Not this time-wasting bilge, that's for sure.