What Dreams May Come

Beautiful dreams these be indeed. What Dreams May Come is a stunningly original visual journey to heaven, hell, and beyond. But like most dreams revisited with eyes wide open, this one's content dissolves into a transparent puddle of inchoate thoughts and predictable iconography. The film's maddening dime-store metaphysics are part and parcel of the story's epic romantic sentiment and classically familiar visual cues. What Dreams May Come straddles an intriguingly awkward gap between its “art film” ambitions and its “mass market” inclinations. And though the film is mired in a granola slick of touchy-feely hokum about eternal love, the afterlife, and the beyond, the film's absolute gravity about its subjects of life and death make it an original exception to our standard romantic sagas. Of course there's also the fact that What Dreams May Come looks like nothing else you've seen before (which is partly due to the recent advances in electronic compositing technology that permit the creation of amazing new visions never before seen on the screen). The script, which was written by Ron Bass (Rain Man, My Best Friend's Wedding, Waiting to Exhale) and adapted from the novel by Richard Matheson, casts Robin Williams as a modern-day Orpheus who descends to the depths of hell to reclaim his beloved Eurydice. In this version, Williams is a kindly doctor named Chris Nielsen who is married to his soulmate, Annie (Sciorra), a painter and 19th-century art restorer. Before the movie's preamble is over, we learn that the couple's two children have died in a car accident, which is followed four years later by Chris also meeting death in the headlights after he stops to render Good Samaritan aid to another motorist hurt in a car crash. Annie is understandably distraught. Chris finds (with the help of a guide played by Cuba Gooding Jr.) that heaven is whatever you make it out to be, and for him it resembles the romantic visual world he shared with Annie. He is able to enter into her brooding paintings, and his heaven becomes an oozing canvas as he sumptuously slides through paint blobs and stunning two-dimensional scenes suddenly rendered three-dimensional. The film's visions of heaven and hell are fairly conventional: Heaven is full of cherubic sprites and Victorian archetypes, hell is a painting by Hieronymous Bosch (with contributions from Dante). By the time Ingmar Bergman icon Max von Sydow shows up as the Tracker who will lead Chris into hell, well, we're just about ready to sit down and play a chess game with Death. Despite the script's fuzzy logic and tear-jerking ploys, New Zealand director Vincent Ward's American debut makes complete sense in terms of his career progression. Two previous films, The Navigator: A Medieval Odyssey and Map of the Human Heart are boldly original dramas predicated on elliptical time and space strategies. Both succeed to much greater degrees than What Dreams May Come, perhaps because of their more modest budgets and scale. Ward is one of the contemporary cinema's true visionaries and it's always worthwhile to anticipate what new dreams may come from his imagination. This latest one vacillates between the wondrous and the trite, yet I'm certain we're the better for its presence in the world. 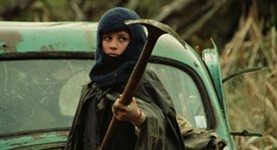