What hath Kevin Williamson wrought? Not this sad excuse for a horror film, thankfully, but the lineage of the recently reanimated slasher genre can indeed be traced right on back to Scream. Still, like Victor Frankenstein, his intentions were good, though the marketing juggernaut he's created is beginning to bear bitter fruit. Like chainsaws and Karo syrup, it comes, I suspect, with the terror-itory (as does Brad Dourif, whose brief cameo here is far more interesting than it should be). Urban Legend's story is a simple one: An unseen psychopath is carving up students at a prestigious Maine university and using those hoary old urban legends as a template. Thus we get the guy with the ax in the back seat of the co-ed's car, the boyfriend dangling from the tree, the Dran-o down the gullet, and so on, until only leads Witt (as good girl Natalie) and Gayheart (as might-be-a-good-girl Brenda) remain running about screaming while Leto's eager-beaver cub reporter seeks the truth. Believe me, though, this is one time it's not out there. Instead, first-time director Blanks fires nothing but, O.D.'ing on cheap frights and cheeseball scare tactics (i.e., “Is that a killer behind me, or just a friend?”) while running his very talented leads (Witt's turn in the indie Fun remains a genre high-water mark) through the same paces Jamie Lee Curtis established two decades before. The only thing new about Blanks' film is the actors/victims: Stereotyped cardboard cutouts such as these are hardly the basis for a riveting thriller, though, and when one dies, another takes his or her place. Even Bill Clinton couldn't give a rat's patootie about these folks' pain. Horror show stalwart Englund is on hand as the grizzled professor of needless exposition, explaining in a vaguely menacing way how these myths and folk tales came about. He looks eerie enough without that Freddy Krueger makeup that he could have been the perfect MacGuffin, but Blanks unwisely does away with him early on in the film, making way for more confusing “whodunit” gambits and poorly lensed carnage. Unlike Scream and I Know What You Did Last Summer, Urban Legend even falls short when it comes to the grue. Nary a disemboweling is lingered over for more than six or seven frames, leaving the viewer to puzzle over just how all these people died. And that deadly teen sexual activity that always seems to result in too much blood? Nowhere to be found. Spottily directed and lacking the dubious merits of even the Friday the 13th franchise, this is one slasher film that should die a quick and lonely box-office death. 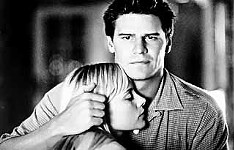 Valentine
I miss the early Eighties, I really do. And I'll give you five reasons why: Friday the 13th, My Bloody Valentine, Prom Night, The Funhouse, ...