The opening scene, silently played and whimsically scored, starts with two men sitting at adjacent tables in an outdoor cafe. The place is Central Park; the time is the 1930s. The two men initially exchange pleasantries. Then, one man borrows the sugar bowl on the other's table and proceeds to spoon heaps of the stuff into his coffee cup; the other reciprocates by blowing cigarette smoke in the direction of the sweet-toothed fiend. Soon, a woman looking for a table in the crowded cafe happens by, and each of the men offers her his chair. The chivalrous rivalry between the two escalates into a scuffle, which culminates into a showdown between a drawn gun and a brandished knife. The man with the gun is stabbed, rather dramatically, but the odd thing is that the assailant is the one who dies, again rather dramatically, while the other looks on in puzzlement. The incident, as it turns out, is a piece of street theatre acted out by two unemployed, down-on-their-luck actors, Arthur and Maurice, who both believe that the most fulfilling job of any actor is a really good death scene. Eventually, the two find themselves on the lam from the law after an unfortunate contretemps with a hammy but successful member of their profession and end up as stowaways posing as stewards on an ocean liner bound for France. Once on the ship, what begins as something wry and fanciful becomes something farcical and slapstick, as Arthur and Maurice scurry down hallways and hide in various staterooms to elude discovery. And then the tone is wry and fanciful again. And then it's farcical and slapstick once more. And so on. The Impostors is an entertaining diversion featuring a host of actors having a grand old time overacting in roles that allow them that luxury. (Molina, as the histrionic Shakespearean actor modeled on John Barrymore, and Scott, as the imperious German head steward with the clichéd scar on his cheek, are the most enjoyable of the lot.) But the seesawing tone is a distraction that calls into question director-screenwriter Tucci's motives in crafting this movie. Is it an attempt to fashion a gentle screwball comedy using the tried-and-true shipboard milieu, something that's part Marx Brothers, part Ernst Lubitsch, part Laurel and Hardy? Or is it an just an indulgence in which Tucci has gathered a group of accomplished players, many of whom appeared in his superb Big Night, for a lark of sorts? Whatever the answer, The Impostors could use a bit more polish, although again, it's fun while it lasts. If anything, it's worth the brief but priceless sight gag in which Arthur and Maurice are disguised as a heterosexual couple at a party on the ship. It's a deadpan spectacle that nearly compensates for everything lacking in the movie. 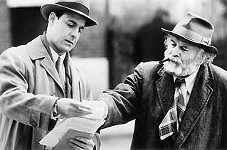 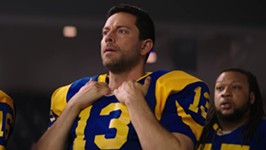