The one true thing that can be said about families is that there never really is just one true thing, only a multiplicity of truths, a plurality of perspectives at least as numerous as the participants themselves. The rich, fertile nuances of these essential relationships and our ever-changing understanding of them are the magma of our dramatic bedrock. The retreads in the family drama cycle are as old and deep as civilization itself, yet every once in a while someone new takes the vehicle out for a spin and finds a few more good miles left in its tires. That's the case with One True Thing, a formulaic family melodrama whose craftsmanship and sensitivity to its characters raises it to the level of sublime group portrait. Adapted by Karen Croner from Anna Quindlen's 1995 novel, the story is told from the point of view of Ellen Gulden (Zellweger), a successful, young investigative journalist whose career is temporarily derailed by her mother's battle with cancer and her father's insistence that she return home and take care of the household. Ellen's resentment over putting her own life on hold is compounded by her complicated feelings for her parents. She desperately longs for professional approval from her father (Hurt), a National Book Award-winning “important” author, while also dreading the time that will be spent alone with her mother (Streep), a domestic whirlwind with whom she's never felt close. Of course, before it's all through Ellen will learn that there's more to her parents' lives than she previously understood. The manipulative man who can criticize her writing as being too emotional can also guilt-trip her into coming home by implying that she has no heart. He can flatter Ellen by asking her to write the intro for his new book at the same time he piles her with his dirty laundry. She comes to suspect things about his relationships with his female students and discovers some of his well-cloaked inner demons. The mother whose domestic and civic involvements Ellen likens to cult activity, is discovered to have a method to her madness and inner resources and thoughts that prove to be revelations to her daughter. “Thank god,” Ellen caustically murmurs in the beginning of the film when someone observes, “There's no place like home.” And even though by the end of the film Ellen's understanding of her family is richer and more multi-faceted, I suspect she's still relieved to know that it's a place she'll only travel through once in her life. What makes One True Thing truly exceptional, however, is the strength of the three central performances (Zellweger, Streep, and Hurt). The actors are all phenomenally affecting and Carl Franklin's direction and Declan Quinn's camerawork make the most of the little moments that pass between people. The film's biggest burden is the clunky whodunit unifying structure that constantly interrupts the narrative as a D.A. quizzes Ellen about the suspicious results of her mother's autopsy. It's an artificial dramatic device that feels external and devoid of real tension. Despite this, director Franklin proves he knows the difference between One False Move and One True Thing. 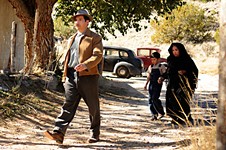 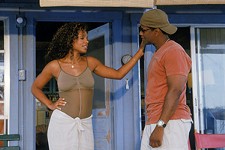