The next time someone suggests, “Let's talk about sex,” politely decline. It was someone's bright marketing idea to put the word “sex” in this movie's title, but honestly, if that's what draws you in to this insipid, amateurish thing, then you deserve everything you get. Beyer, who wrote the script for B.A.P.S., graduates to writing, directing, and starring in Let's Talk About Sex. It's amazing that Beyer ever managed to get her script made, so clichéd, clunky, and underdeveloped is it that one would think that some process of natural selection would curb this misconceived baby before it crawled forth from the crib. Beyer plays the movie's central character, Jazz, an advice columnist who is trying to land a job as the hostess of a new TV show called Girltalk, a program that will speak the truth about women's sex lives. To make her audition tape, she enlists the help of her two roommates, Michelle (Brewster) and Lena (Ingerman). All three of the women are familiar stereotypes: Jazz, the unfulfilled professional who has trouble committing herself to the good man who loves her; Michelle, who has intimacy problems and dates men half her age; and Lena, whose stunning good looks are no protection against self-esteem issues that manifest themselves by repeatedly getting involved with the wrong men. The audition tape is a documentary-style, gal-in-the-street montage of women delivering one-liners and quips about sex and dating in the Nineties, discussing their likes and dislikes, their fantasies and their fetishes. The comments on the tape hardly veer from the familiar and, for the first time in my life, made me wish that Henry Jaglom (who, in films like Babyfever, did this kind of interview thing with so much more grace) was in charge of the show. When the film isn't doing this documentary thing (with a frenetic patchwork hand-held, scattered camerawork), it's mucking around in some of the worst-scripted melodrama witnessed in some time. It's bad enough when one character contrivedly asks, “What's going on in that head of yours?” But the reply is a pure howler: “I'm tired and I'm angry and I'm so tired of being angry. When does the pain go away?” Perhaps actresses with more experience and range could have brought some reality to these characters but really, what can be done about a sequence that requires all three leads to wordlessly roam their apartment cleaning and crying? Let's Talk About Sex is one conversation that we can do without. 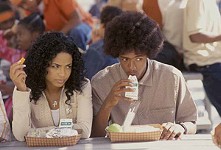 Love Don't Cost a Thing
A nerdy high school student pays a cheerleader to pretend to be his girlfriend in order to appear cool.