It's 1976 and Viv Abramowitz (Lyonne) has all the typical problems of a 15-year-old female adolescent. On top of that, there's her flaky family life which consists of being the only female in a household of two brothers and a divorced father and living the life of “divorce nomads” who move from one crummy apartment with an elegant name to another (usually in the middle of the night). They're like the “Jewish Joads,” says her dad Murray (Arkin), who always makes sure that their address remains within (but just barely) the Beverly Hills zip code because, “Furniture is temporary; education is forever.” And if things weren't difficult enough, Viv has suddenly become “stacked like her mother” and she not only has to deal with her own ambivalence about these mutant lumps on her chest but also with brothers who like to gape at them and an overbearing father (who could pass for her grandfather) who takes her out shopping for a brassiere in the film's hilarious opening scene. Her next-door neighbor Eliot (Corrigan), a sweet-natured pot dealer who dresses in Charles Manson T-shirts, is also smitten with Viv and her breasts. Slums of Beverly Hills is a very funny and well-acted comedy about the slings and arrows of outrageous adolescence. Few films have come this close to accurately depicting the particular mortifications of female adolescence while also maintaining a fulsomely comic tone. If Slums seems a bit reminiscent of Maria Maggenti's buoyant teen-girl comedy of a few years back, The Incredibly True Adventure of Two Girls in Love, it should come as little surprise that Maggenti and writer-director Tamara Jenkins were NYU classmates. According to Jenkins, her film is semi-autobiographical, although the script was incubated at the prestigious Sundance Director's Lab. Oftentimes, however, the excellence of the script and several performances outshine the film's camerawork and pacing. Lyonne (who also served as the central narrator of Woody Allen's Everyone Says I Love You) delivers a memorable performance here, as do Arkin, Corrigan, and Krumholtz, although Marisa Tomei's embodiment of the troublesome, pill-popping cousin who comes to live with the Abramowitzes is more caricature than character. Moreover, Tomei's performance is given little directorial assist from such scenes as the overly long and badly staged interlude that has her and roommate Viv dancing funky with her vibrator. Technically, Slums stumbles in many places, although the script's wisdom and humor and Lyonne's unifying authenticity make its shakier qualities seem like mere potholes on the back alleys of Rodeo Drive. And it's no doubt a more realistic depiction of Beverly Hills womanhood than Pretty Woman or 90210. 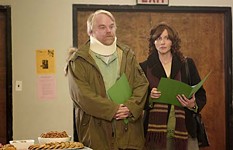 The Savages
Starring Laura Linney and Philip Seymour Hoffman, this smart, funny, thoughtful, and exquisitely realized film is one of the best of the year.