Well, ah, it's got a good soundtrack. But then, with both ex-Devo madman Mark Mothersbaugh and the Dust Brothers on board, how could it not? That's about all there is to say about this black-cotton-candy mouthful of a film; it vanishes after one bite and leaves an unpalatable goo coating your psyche, which, thankfully, evaporates about three steps out of the theatre. Nominally based on the old collegiate myth that a roommate who suffers the suicide of another roomie scores a free 4.0 ride that semester, Dead Man on Campus has as great a schizophrenic personality disorder as that of its muddled characters. Dark comedy or dork comedy? No one can tell and MTV helmer Cohn seems unable to cough up any single line of direction. In the end, it's just bad comedy, really. Scott and Gosselaar play Josh and Cooper, new frosh roommates at the prestigious Daleman College. Scholarship student Josh arrives prepared to work his fingers to the bone in pursuit of a medical degree, but quickly finds his plans -- and grades -- scuttled by party animal Cooper, who introduces the newbie to the joys of all-night partying and general malfeasance, dude. Woe comes to they who enter the fuckup zone so early in the term, and by mid-semester it appears as though both boys will boomerang back out the way they came in. Unless they can find a roommate so depressed that he'll kill himself and thus guarantee the pair that coveted 4.0. From here, Dead Man on Campus ushers in a series of mentally unbalanced roomies-to-be; the hyperkinetic party-demon Cliff (Munro), paranoid android Buckley (Pearlstein), and the Goth pretender Matt (Page), none of whom seem able or willing to make that final leap. Try as it might, Cohn's film just isn't all that funny. Dozens of throwaway gags elicit laughter that collapses in your throat mere inches away from exiting as a full-born guffaw. There are a few -- precious few, really -- chuckles here, and most of those come from Scott, who despite his inability to nail a decent script to save his life (near-misses like American Werewolf in Paris and That Thing You Do! don't quite count) plays a mean straight man to Gosselaar's heinous party animus. Scott is such a likable actor -- tall, lean, vaguely perplexed -- that it's hard not to grin at his zany, madcap predicaments … but not that hard. Playing like one of those old National Lampoon parodies (the magazine, not the Chevy Chase merchandising arm), Dead Man on Campus lacks the crucial spitefulness of its convictions. A dark comedy caught in a white-light washout, it's neither mean enough to be funny, nor funny enough to mean much. 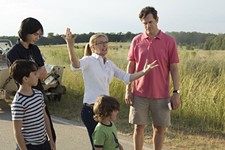