My friends look at me as though I've been off on vacation too long when I tell them of my delight in watching a movie called Killer Condom. But this silly yet fascinating comic horror/detective story has a lot more on the ball than sheer latex. All in all, this summer has not been a terribly carefree time for male private parts, what with There's Something About Mary and now this. If the words, “Troma Entertainment” mean anything to you, then you already have a good idea of Killer Condom's pedigree. If not, then just picture Troma as the company whose roster of releases is typified by such titles as Chopper Chicks in Zombietown, Tromeo and Juliet, and Teenage Catgirls in Heat (an Austin-made film, by the way). Killer Condom is a goofy blend of detective noir by way of German Expressionism, gay identity drama by way of soft-core titillation, and horror genre by way of low-budget comedy effects. It seems the film's carnivorous condoms are striking hapless victims in the Hotel Quickie when gay detective Luigi Mackeroni (Samel) happens onto the case. Other players include the comely young rent boy Mackeroni is hot for, the transvestite ex-cop Bob/Babette with whom Mackeroni once had a fling, and Mackeroni's straight partner Sam, to whom he delivers an impassioned, no-compromises defense of his gay lifestyle in a dramatically staged crosswalk setting. The killer condoms look more like diaphragms with teeth. A pathologist categorizes them as being a combination of worm, jellyfish, and piranha. At first, they scurry along squeakily cute but suddenly they turn into penis-chomping predators. The film is based on Ralf König's popular German comic book, and the set design is by the famed artist of the fantastic H.R. Giger (Alien, Aliens). Added to this weirdness is that the entire story is set in New York City but everyone speaks German. It's N.Y.P.D. Kraut with subtitles, or Police Squad! with stunning set design. Humor is everywhere -- from the droll one-liners (“If we don't do something, we'll have more pricks on our hands”) -- to the hospital ward full of dozens of dickless men and one female tourist whose nose was bitten off by a rub-out rubber. The story's deus ex machina, unfortunately, relies on uncomfortably misogynistic clichés. But there is great contemporary resonance in the plot turn of a presidential candidate, Dick McGovern, whose manhood becomes another victim of this penile predator. Smart, funny, and stylish, Killer Condom pulls back whenever it finds itself teetering on the brink of artfulness and shows us one of those fanged rubbers skittering across the floor. Hell, if you can't join 'em, shoot 'em. 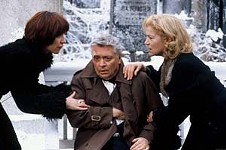 Go for Zucker!
As two German families collide, the film explores its characters’ shared history to unravel the challenges of political and personal reunification. 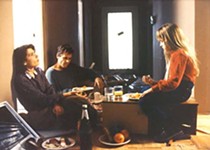