How Stella Got Her Groove Back

Blessed is the romantic comedy that doesn't take the all-too-predictable cravings of the human heart as a license to kludge together a random handful of market-tested clichés and wait for the checks to start rolling in. So a big shout-out to producer Deborah Schindler (Waiting to Exhale) and rookie director Kevin Sullivan for making this movie so much better than it really needed to be. Even with Stella's success all but assured by its source material (a bestselling novel by Terry McMillan, who also wrote Waiting to Exhale), a truly gorgeous pair of lead actors, and a sumptuous tropical setting, the filmmakers go to obvious pains to add a bit of nutritive value to their sweet, frothy confection. Not so much in the area of originality; what we have here is a pretty conventional May-August love story in which an emotionally tapped-out 40ish businesswoman (Bassett) gets her vital juices flowing again via a deliciously inappropriate taste of young beefcake (Diggs) she meets during a Jamaican holiday. What really elevates this movie to the status of a future Lifetime Network classic is the care screenwriters McMillan and Ron Bass have taken to flesh out not only the lead characters but also supporting figures such as Bassett's lifelong sidekick (Goldberg, mugging and ad-libbing her way through one of the bawdy, wisecracking roles on which she owns a virtual patent) and her protective 11-year-old son (Pagan). Though most of the characters are genre archetypes, the addition of interesting backstory and a few charming throwaway scenes add satisfying depth to their relationships. Diggs, a stage actor playing his first major film role, demonstrates major heartthrob potential. As 20-year-old Winston, he's every straight woman's guilt-free fantasy fling: open-hearted, intelligent, well-bred, honorable and -- oh yeah -- built like a stack of glistening black granite. His repertoire of advanced love-man moves should be compiled into an instructional video for sexually frustrated high-school guys. And his appeal is likely to extend to male African-American viewers, who'll appreciate seeing one of their peers portrayed as something other than a promiscuous dog whose every waking move is dictated by General Johnson. But for all of Diggs' precocious charm, it's Bassett -- again demonstrating a knack for characterizations that are both glamorous and rich with Everywoman appeal -- who's the clear centerpiece here. With qualities of beauty and strength that seem to inspire rather than distance her female fans, she's by now obliterated any suspicion that her Oscar-nominated role in What's Love Got to Do With It was a flash in the pan. (And as an icon of middle-aged feminine mojo, she's also a gratifying answer to all these priapic old goats cavorting around in Bulworth, A Perfect Murder, Lolita, and Six Days ,Seven Nights, not to mention the inevitable Bill 'n' Monica pics that should be cropping up any day now.) The date movie of the summer has been a little late in coming this year, but it's here at last. And it is indeed a groove.

Gunpowder Milkshake
Action concoction isn't stodgy, but it's not that filling, either 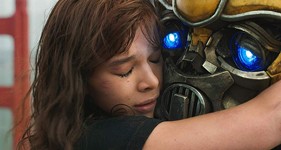