Tim Kirkman's open letter to Senator Jesse Helms is a sincerely heartfelt meditation on the longtime lawmaker's homophobic and generally mean-spirited political stance. Former North Carolina native son and current New York City resident Kirkman returns to the state and begins examining the senator's ideology as a means of furthering his own self-exploration. Kirkman cites at the start of the film numerous similarities: Both men were born in the same small North Carolina town, both attended Wingate College for one year before transferring, both worked in journalism and radio broadcasting, both were raised Southern Baptists, etc. But here's the real hoot: For most of their adult lives, both have been obsessed with homosexual men. Kirkman, a first-time filmmaker, picks up a camera and begins talking with Helms' constituents in order to better understand what makes each of them tick. It is an election year and Kirkman's queries take him far and wide. Among those he visits with are his actress cousin in Charlotte, the state's first openly gay mayor, a married lesbian couple, a National Guard supporter of Helms' forthrightness, a black activist, student protesters, noted North Carolina writers Lee Smith and Allan Gurganus, a conservative newspaper editor, a single mother of a biracial HIV-positive baby, his own father, and the founders of MAJIC (Mothers Against Jesse in Congress) -- two women who lost their sons to AIDS. What do we learn? Well, not much that we didn't already know about the gay-baiting Helms, although the portrait makes him much more understandable as the product of this specific place. And what more do we learn about Kirkman? Not much and, well, that's the heart of the problem with this piece. Although a completely out gay man living in New York City, Kirkman is less than forthcoming as to why he fled the state two weeks after his college graduation and why he now returns. He tells us he headed back south after the breakup of a love affair; he heads back north after the lover commits suicide. It feels as though there are more than a few details missing from Kirkman's meditation and that his own self-exile has been exempted from the same scrutiny he holds to the exclusionary politics of Jesse Helms. In addition to this, Dear Jesse is pocked with the kind of shaky camerawork that's indicative of novice filmmaking. The amateurish technical aspects augment the film's grazingly cursory philosophical probe, thereby creating the cumulative effect of a well-intentioned but bush-league investigation. Or maybe North Carolinian Thomas Wolfe was right about that not-being-able-to-go-home-again stuff. 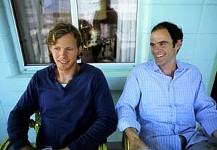 Loggerheads
Despite an overreliance on metaphor and symbolism, Loggerheads is an affecting little film about characters who struggle with issues connected with adoption, homophobia, and loss.