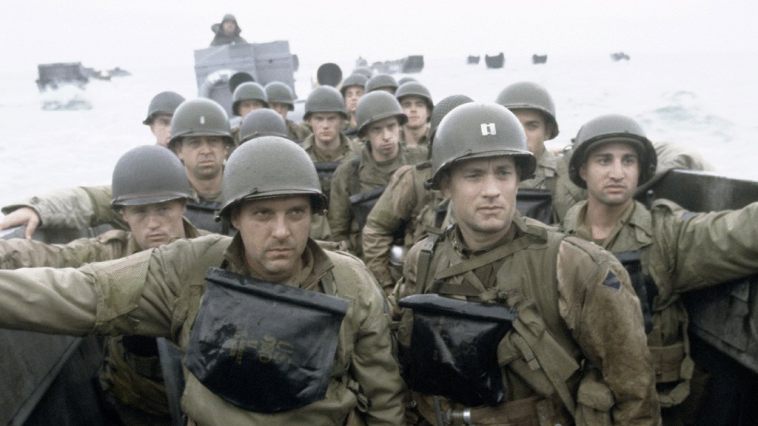 Weeks before its release, Saving Private Ryan had already been tagged as “the best film about war ever made.” This from critics and veterans alike, and though I fall (thankfully) into the former category, the film is inarguably one of the most realistic depictions of what it must be like to engage in modern warfare. For once, believe the hype. It certainly doesn't hurt matters that Saving Private Ryan is helmed by icon/director Spielberg and many of his longtime collaborators, including director of photography Janusz Kaminski (Schindler's List, Amistad), and is populated by a brilliant ensemble cast headed by that other Hollywood icon, Tom Hanks. In Robert Rodat's script, Capt. John Miller (Hanks) is ordered to lead his squad of eight men through the madness of Omaha Beach and D-Day, then go behind German lines to rescue Pvt. James Ryan, the only surviving brother among four soldiers, and thereby scuttle a potential public-relations snafu on the home front. Miller and his men don't give a rat's ass for this unseen, unknown private they've been ordered to find, but they know – or at least Miller knows – that finishing the mission brings them all one step closer to home and hearth. Rounding out Miller's squad are some of the best character actors working today, including Sizemore's square-shooting Sgt. Horvarth, Burns' wisecracking Brooklyn dogface Pvt. Reiben, Diesel as the requisite Italian-American Pvt. Carpazo, Ribisi's medic Wade, newcomer Pepper as the squad's devoutly religious sharpshooter, Goldberg as the Nazi-baiting Jew, and Davies as the conscripted, unsure Cpl. Upham. Rodat and the actors steer clear of the most obvious clichés in squadron demographics, and instead, let their audience come to know them on their own terms. One by one, the men are introduced by mannerism and dialogue, very slowly emerging as fully developed characters who, by the end of the film, you feel as though you've known maybe your whole dreaming life, if not your waking. All these acting chops merge with Spielberg's brilliant recreation of the final countdown to V-E Day. Beginning with the Allied forces landing at Omaha Beach (which goes on for an unprecedented half hour), Spielberg proves again and again just why he's one of the most respected filmmakers alive. Never has there been such unmitigated carnage outside of combat documentaries: Awash in blood and strewn with staggering, limbless men jetting arterial gore, the Omaha sequence is a prolonged, relentless nightmare of death, agony, and stark, naked terror. And yet it's a gorgeous, achingly affecting and artistically rendered sequence as well, a ballet of bodies, an adagio of organs. Spielberg paints everything in desaturated, khaki tones; dirt clods hang suspended, jittering in the frigid air while bullets impact and bodies sag and fall like sad, untethered marionettes. On top of this epic, disturbing realism, of course, is Saving Private Ryan's genuine sense of loss and humanity; it's perhaps the most humanistic war film since J'Accuse or All Quiet on the Western Front. A bitter, bloody masterpiece with adrenalized emotions and hyper-realized images, this is perhaps as close to battle as any sane human being should ever hope to tread.