Although fast-paced and well-intentioned, this French youth film falls into the same trap as so many other youth-focused movies throughout the world: a callow and self-absorbed perspective. The story follows the shifting allegiances between a cluster of friends living in the French countryside. Quentin (Cervo), who is not yet 20, has written a book about disaffected youth that has brought him to the attention of the French literary world. In search of more true-life stories for his next book, Quentin pals around with Samir (Bardadi), who seems perpetually sad due to the violent death of his lover two years earlier. Quentin is looking for stories but Samir is looking for love and is hurt when Quentin rudely rebuffs his sexual overtures. Quentin is sleeping with Julie (Bouchez), who lives alone in her parents' country estate, where much of the story takes place. But Julie finds herself increasingly attracted to Quentin's best friend Jimmy (Rideau). Quentin moves to Paris to follow his muse, Julie and Jimmy become an item, and then, along with Samir, the threesome tries to figure out what went wrong with their old pal. Racism then rears its head and throws more real-world complications into their lives as the film strives for relevance beyond its lovelorn, post-adolescent yearnings. Full Speed bears some resemblance to Andre Techine's 1993 film Wild Reeds, a French coming-of-age story set during the years of the Algerian War. Coincidentally, that film starred Rideau, Bouchez and Full Speed's writer-director Gaël Morel. Here, even though Morel tells his story quite economically and briskly, the film never quite compensates for its lack of substance. You just want to shake it and tell it to grow up already… or whatever the French equivalent of that expression might be. 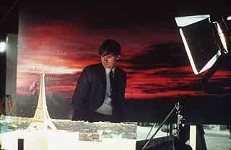 CQ
CQ, the debut feature by Strokes music videographer and Coppola family upstart Roman (brother to Sofia, son to Francis), has a plot skinnier than its ...