The cinematic equivalent of Cracked magazine, Mafia! never quite lives up to its MAD potential, instead shooting for the obvious, and releasing a steady stream of fart jokes and toilet humor that flows over the audience in a foul wave of lowest-common-denominator titters. Abrahams, who started out as part of the holy trinity of cinematic parody -- (David) Zucker, Abrahams, and (Jerry) Zucker -- with The Kentucky Fried Movie back in 1977, has since helmed the enormously successful and spot-on Airplane!, as well as the Naked Gun series and Hot Shots! Despite, or perhaps due to, his love of exclamatory titles, Abrahams and his writers have been able to keep their one-note comedy ball rolling for two decades now, but Mafia! signals the end. The story takes its structure and plot from Coppola's Godfather trilogy, Scorsese's Casino and GoodFellas, but curiously leaves out any of the gangster genre's more formative examples. I kept waiting for a White Heat gag to no avail. Mohr plays Anthony Cortino, the son of godfather Vincenzo (Bridges, looking remarkably spry -- this was his last film). Paralleling the Coppola films, Anthony is forced into taking over the family business after the death of Vincenzo (in an amusing homage to Brando's scene amongst the tomatoes), despite the protests of his wife Diane (Applegate). From there, it's on to Las Vegas and Casino territory, with plenty of flashbacks to catch up on evil brother Joey Cortino (Burke) and the host of lesser wiseguys who round out the film. Whereas the usual gag ratio in an Abrahams film is two or three per minute of screen time, Mafia! seems to cough up a genuine guffaw only once or twice every quarter-hour, which, as you can imagine, grows quickly wearying. On the face of it, the film seems uninspired, rushed, and cobbled together from leftover jokes that couldn't quite make it into the last Naked Gun episode. Watching grass grow is more humorous than this, and if you have a dead clown nearby, well, there's just no comparison. Mohr has a daft and clever comic wit about him, though. His quiet, not-quite-Christopher Walken voice is ready-made for zippy one-liners, and Applegate already proved her ditzy comic abilities on Fox's Married … With Children and in The Big Hit. This isn't nearly enough to sustain Mafia!'s 93-minute running time, and a long-overdue Jaws parody three-quarters into the film makes you wonder just how long Abrahams has been sitting on some of these gags. Best to go rent Police Squad! one more time. 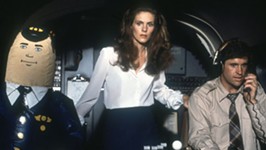